Andrew Ranger moves up in standings with top-5 score

Posted by: Bulletin Editor August 17, 2014 Comments Off on Andrew Ranger moves up in standings with top-5 score

Andrew Ranger and the #27 Mopar Parts Dodge team continued their charge upward in round number eight of the NASCAR Canadian Tire series this past weekend at Riverside International Speedway near Antigonish, NS. Ranger posted his fifth top five result of the season to climb into second place in the overall championship standings.

Carrying the momentum from their strong showing a week ago at Trois-Rivieres the #27 Mopar Parts Dodge was solid throughout practice and during the qualifying session Ranger was the first competitor out and set an extremely fast lap as the one to beat. It held for much of the session and only one driver could better it meaning Ranger would start the 300 lap event on the outside of the front row. 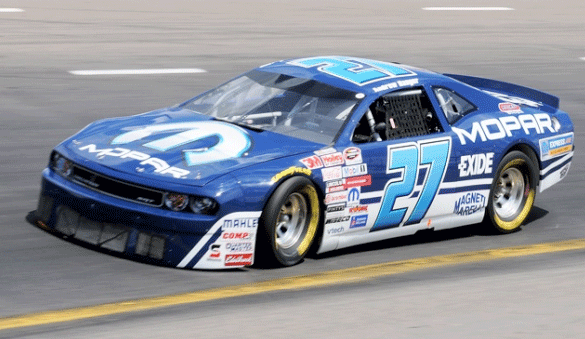 “Our Mopar car felt very good all day” said Ranger. “I was very pleased with the car and felt we’d have an excellent chance in the race” he added.

At the drop of the green flag Ranger seized the opportunity to lead a lap, and collect a bonus championship point, so he pushed the #27 Mopar Parts Dodge to the front for a few laps. He relinquished the lead to preserve his car but return to the point on lap 37 and remained in top spot for the next 100 trips around the circuit.

“In the championship you need as many points as possible and I wanted to lead as many laps as we could to collect more bonus points” he explained.

Following scheduled pit stops for fuel and tires Ranger kept the #27 Mopar Parts Dodge near the front of the field. However another long green flag run would work against the teams strategy.

“We were waiting to take on our right side tires until later in the race but we didn’t get the opportunity until much later than we hoped” said the driver.

When the caution did finally fall the #27 Mopar Parts Dodge team performed quick service and returned Ranger to the fight. From that point it was a battle to the finish to gain as many positions as possible.

“I pushed the car as best I could in the closing laps and was trying to get around my teammate for a podium finish” said Ranger. “But it was another good day for us, we gained some points in the standings and we have three races to go. A good job by everyone on the team” he added.

With a fourth place finish Andrew Ranger moves into a tie for second spot in the overall standings after eight events but holds the tie breaker advantage.

Andrew Ranger and the #27 Mopar Parts team return to action next August 31 as part of the NASCAR Truck weekend at Canadian Tire Motorsport Park.

Race fans can get more information and follow the #27 Mopar Parts Dodge team all season by going to www.mopar.ca and clicking on Motorsports.

2014-08-17
Bulletin Editor
Previous: An inconvenient and catastrophic view of the free trade threat
Next: ‘Obvious choice’ in naming Corktown Common wins him a picture