Neonic pesticide ban vital for bee health – and ours

Posted by: Bulletin Editor October 8, 2014 Comments Off on Neonic pesticide ban vital for bee health – and ours

with Caroline Schultz and Faisal Moola. Apiculturalists, Ontario lost 58% of its honey bee colonies this winter – more than twice the national average of 25%, and nearly four times the “long term acceptable level of winter losses” of 15%. These losses are the latest in a disturbing trend of significantly elevated honey bee mortality in North America and Western Europe since 2007.

These figures are astounding, and considering the important role that these and other wild pollinators play in providing our food, bold action is needed to ensure their health and that of humans and the environment. Encouragingly, a recent Oraclepoll poll found 92% of Ontarians surveyed support government taking action to protect pollinators. 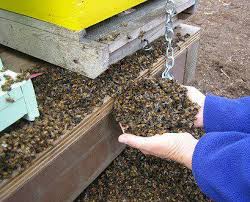 Last year, the European Commission took a huge step to protect pollinators and banned the use of three major neonic pesticides – clothianidin, imidacloprid and thiamethoxam – because of their risk to bees. Said the European Environment Agency’s Executive Director Jacqueline McGlade: “Based on the body of evidence, we can see that it is absolutely correct to take a precautionary approach and ban these chemicals.”

Ontario’s Minister of Agriculture Jeff Leal has said that the province intends to “move away from the widespread, indiscriminate use of neonicotinoid-based pesticides” and adopt some sort of licensing system. The government’s concern on this file is very welcome but, to truly protect our pollinators, Queen’s Park must go further and ban these toxic chemicals.

To be sure, pesticide toxicity is not the only environmental stressor pollinators face. Nutritional stress, pathogens, severe weather events and habitat loss are significant threats in some areas. But a growing body of scientific evidence indicates that neonics are a primary cause of these elevated levels of honey bee mortality and are killing or harming other insects as well as animals farther up the food chain.

Neonics are a class of powerful neurotoxic insecticides primarily used in agriculture. They are systemic pesticides, which means they are absorbed and incorporated into every part of the plant from the leaves and stems to the fruit, pollen, and nectar. They are potent and persistent, remaining effective against target pests (as well as non-target species like bees) months after application. They are also highly water-soluble, so they can easily contaminate ground and surface water and can persist in soils and aquatic environments for a long time, accumulating as the chemicals are used repeatedly.

Since the European ban, the case for banning neonics has only grown stronger. In June this year, the Task Force on Systemic Pesticides released the results of its “worldwide integrated assessment” of more than 800 scientific studies of the impact of neonics on biodiversity and ecosystems. They concluded that the current scale of neonic use is unsustainable and is harming biodiversity and ecosystem functioning. They recommended that policy-makers apply a precautionary approach to the regulation of these chemicals and promote alternate pest management strategies such as organic farming methods.

Although Ontario has announced its intention to license neonics, this action is not bold enough. We must ban these destructive chemicals as part of a global initiative to protect pollinators, food systems, and ultimately our own health.

2014-10-08
Bulletin Editor
Previous: Tank settles in, Daisy chases woodland critter, disgraces herself
Next: Tory would be respectable mayor, but we need more