Oct. 8, 2014 and Tank is settling in better. We’re still at our cottage at Lake Erie. He’s still sutured to me at the hip, having lived in a totally male world. But Paulette is slowly making ground with him.

He comes to her when she calls. Strangely, he’s not at all the gourmand we thought he would be, especially since with Danny he was often “treated” to whatever his well-intentioned fans thought Tank would enjoy (or what they had left from a hotdog or burger). 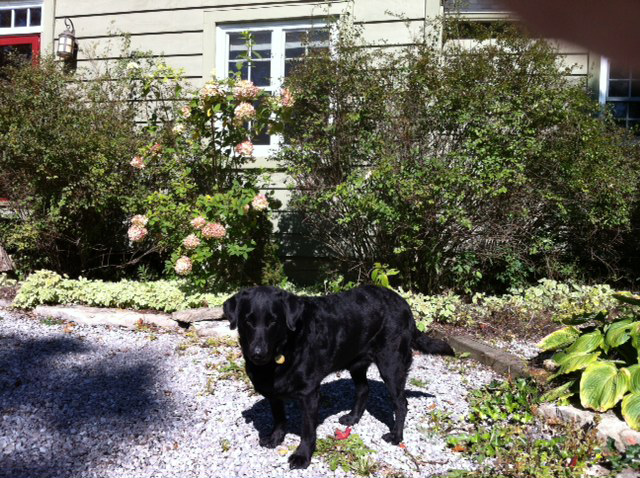 He’s not a big eater and we worried in the first couple of days that he wasn’t going to eat at all. We feed a high-quality kibble augmented with vitamins, a bit of garlic and sometimes olive oil.

He hadn’t touched that. His bowl remained full.

However, he has now started ever-so-daintily to eat a bit of it. If we hand it to him, he’ll eat from our hands. But the idea of course is to get him ravishing his food bowl in the way one expects from a 80-lb. black lab.

I go off in the Jeep, sometimes with Daisy, leaving Tank home with Paulette so he’ll get used to the idea that he and I don’t go everywhere together. As he feels more secure that will dissipate.

He likes quinoa and we’ve mixed that with his kibble to good benefit. It’s also helping on the way out and his early looseness (likely because of his emotional turmoil) seems gone.

He was pretty stable with Kevin Scrimshaw, but Kevin’s apartment was familiar turf with familiar dog pals and he’s now our dog so he’s got to live with us.

Tank and Daisy get along fine, if not famously. She of course has been “invaded” by a new dog when she was previously the only four-footer in the house.

But she’s taking that in stride and she’s absolutely competitive with Tank when it comes to fetching a ball. She’s faster, smaller and more agile. And also more aggressive. He’ll chase it down but then just chew on it or drop it and move onto something else. She will actually bring it at least part way to me.

Tank hasn’t really glommed onto what fetching is all about. I guess he never was exposed to it, though a retriever is supposed to be hard-wired to retrieve.

We have some teaching to do on that front. Fetching is great exercise for a retriever but he ends up forcing me to retrieve after he’s tracked down the ball.

Yesterday on our beach and shoreline walk, Daisy went after some poor woodland creature, a baby of some sort, and we couldn’t get her quickly away. Paulette did manage to give the critter some space so it could flee but Daisy spend much of the afternoon in a frantic search for that poor little being and she refused to come when called.

Usually she comes right away.

She stays away from the gorgeous red foxes that sometimes wander onto our seven acres. Coyotes are less visible but now with a sizeable creature like Tank, we’re less worried about Daisy’s security from a coyote.

2014-10-08
Bulletin Editor
Previous: A refreshed Tank has joined a brand new pack
Next: Neonic pesticide ban vital for bee health – and ours