A refreshed Tank has joined a brand new pack

Posted by: Bulletin Editor October 7, 2014 Comments Off on A refreshed Tank has joined a brand new pack

Oct. 6, 2014 was our first day together outside Tank’s familiar turf of St. Lawrence Neighbourhood. It would be our second night together. It was also the first time he was in for a 90-minute Jeep drive for a pack-building exercise with just Paulette, Daisy, Tank and me.

We were headed for our Lake Erie cottage in a forest. It’s an environment Tank was bred to master.

Getting us all to be a dog pack, with Paulette and me as leader, is a priority for all dog owners. Otherwise one of the dogs might become leader by default and that’s a mess. I’ve known families where the dog was boss and there are better options than that.

It was probably the longest vehicle ride he’d ever experienced and he was alert the entire trip while Daisy, an old travel hand, dozed on the back seat beside him.

When we arrived the surf was high, driven by a stiff south wind. With the New York shoreline utterly invisible, it was the very scene that had brought so many upstate New Yorkers to build cottages on our shore. It reminded them of Martha’s Vineyard on the Atlantic ocean where many vacationed in their youth while attending Ivy League universities.

Our cottage was built in 1927 for summers only. Paulette and I winterized and expanded it 11 years ago as a spot for our relatives to share on visits to Ontario.

As Tank lumbered out of the Jeep his nose was practically twitching with all the new smells. He and Daisy share that acute nose-consciousness that seems so much more focused with them than it does with many other breeds. Daisy, also a rescue dog, isn’t really a breed. More of a mélange. 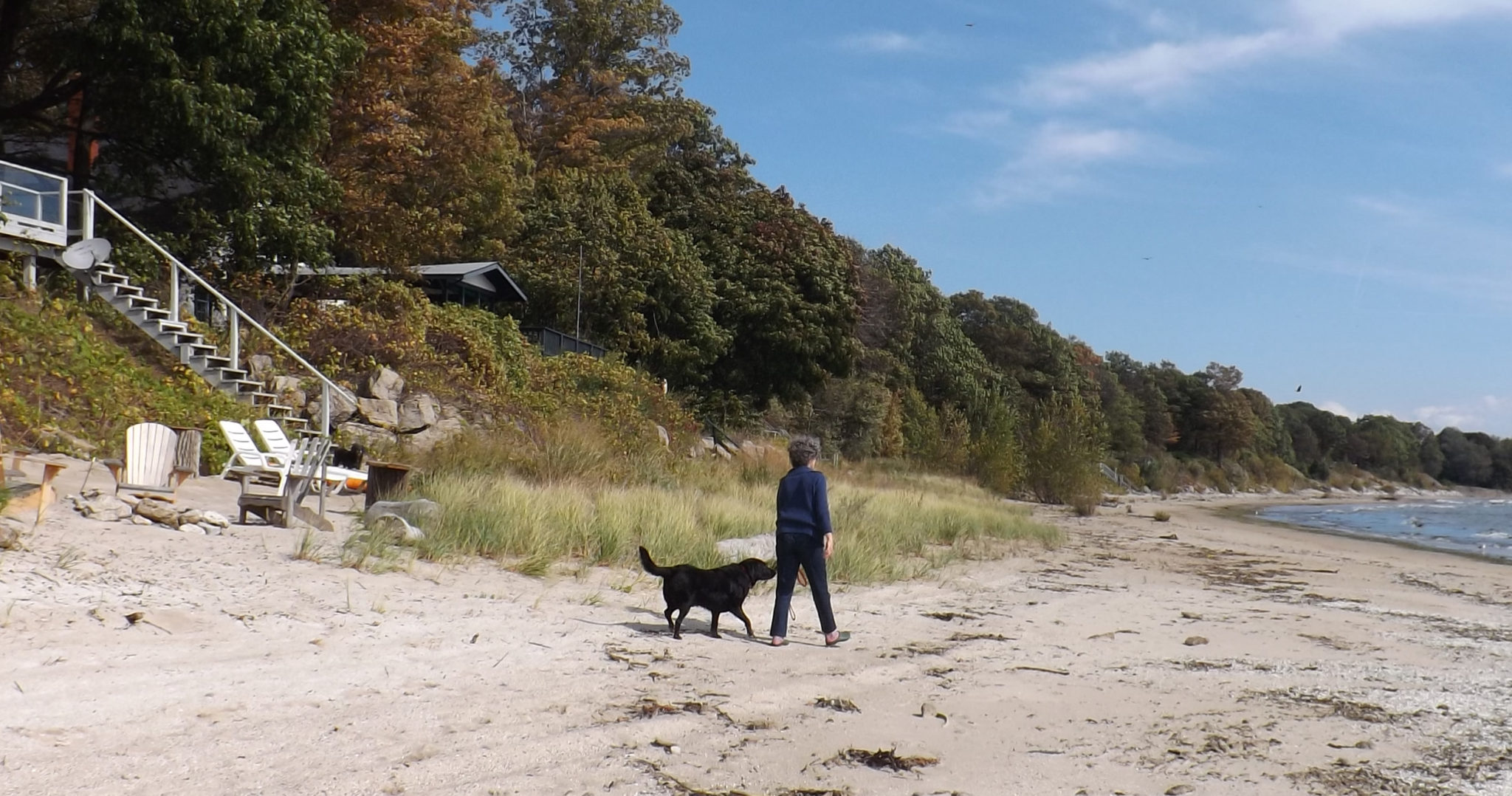 We had learned from the vet where Danny took Tank that he was closer to four or five years old, not eight or nine as many believed. After all there is no grey fur and his teeth are sparkling white.

Danny, despite his proclivity to get tipsy on strong drink, was a diligent dog owner and a responsible citizen.

When he had extra cash he would pay upfront at the vet so he had a positive account balance to look after Tank. Tank still has $30 in his vet’s account. Danny marshaled his financial resources, limited as they were, with great forethought.

He was as beloved a personality as was his loving companion Tank and most who knew him miss Danny.

Tank also spent time with our Toronto neighbour Kevin Scrimshaw who often walked Tank along with his own pair and the odd visitor he might be looking after for a day or longer. Kevin is extraordinarily knowledgeable about dogs and seemingly has a telepathic connection to many of them.

Fresh from the Animal Services pound, Tank was confused and distraught. He missed Danny and focused on Kevin. The first few nights he stayed with Kevin to help him adjust to his new world without Danny. 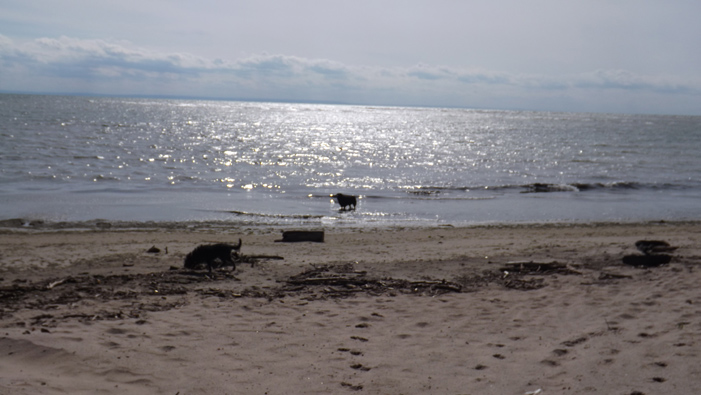 A pair of beach scroungers.

But to become “our” dog, Tank had to re-focus his dependency on us. Being a guy, as he most definitely is, he naturally focused on me. Paulette’s fine, but he’s suddenly my dog.

On our first walk from the cottage to the lake his nose was twitching with the sound and smell of the surf. A violent surf, but he’s a hefty dog.

He was in the surf in a shot. Soaking wet, covered in sand, then sent by us back into the surf to get the sand off and back to the house.

So when we took our walk the following day it was for a long wander through a forest, onto the beach and a long walk back to the house.

He and Daisy were in and out of the surf along a mile of beach before we headed back.

At night he was on my side. He follows me everywhere. I took him and Daisy out to buy newspapers and he whined when I left them alone in the car. I deliberately went on other stops, even just to disappear in a store so he’s get used to the idea that he doesn’t have to be with me everywhere.

He seemed to get the notion. Leaving Tank and Daisy in the house while we drove away for a while had us nervous.

He’s a big dog and if he goes nuts, he can do a lot of damage to the house. But no, he was a gentleman. No damage. Just great celebration when we returned.

Tank is coming along famously.

The dog-wash courtesy of Pet Cuisine on Front St. E. is good as often as he requires it, say Chris and Philip.

That first Pet Cuisine bath in their remarkable facilities revealed a glorious, sleek and shiny ebony coat. The aroma of many days at the pound simply evaporated.

So far, that initial dog-wash has held up and Tank smells just fine, if at all. Lake Erie is cleaner than we have been told, especially where we are.

Next, getting Tank to eat what we serve…

2014-10-07
Bulletin Editor
Previous: Day One with Tank in our home overnight and now fulltime
Next: Tank settles in, Daisy chases woodland critter, disgraces herself