Posted by: Bulletin Editor August 13, 2015 Comments Off on Native woman artist award is announced in Toronto

Native Women in the Arts (NWIA) announced in Toronto that the winner of the inaugural Barbara Laronde Award is Aylan Couchie.

The award was created to honour the legacy of NWIA founder Sandra Laronde and her vision and commitment to Indigenous artists. It celebrates and acknowledges the career of one outstanding, emerging, Northern-Ontario based Indigenous female artist, recognizing the geographic and economic barriers that many Northern artists face.

Sandra Laronde’s 19 years of leadership at NWIA paved the way for many Indigenous artists at various stages of their careers. The award is named after her mother, Barbara, who has been the backbone of her family and a leader in the Northern Ontario community, Temagami First Nation. Barbara inspired her children to be creative and entrepreneurial, and it is with this spirit that NWIA launched this new award. 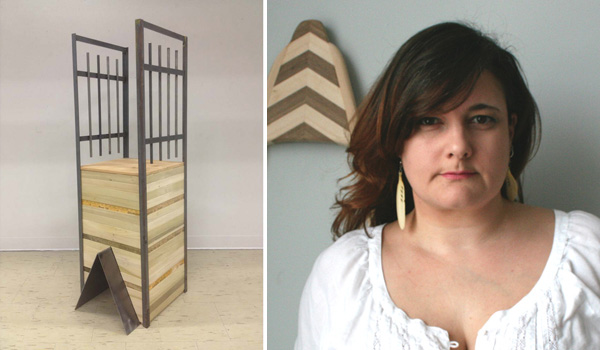 Aylan Couchie, the recipient of the first annual Barbara Laronde Award, is an Indigenous artist from Nipissing Reserve in North Bay, Ont. Having recently completed the

Fine Arts Advanced Program at Georgian College she has been accepted to NSCAD University in Halifax where she expects to complete her BFA by 2016.

“Sense of self and identity are often developed through cultural upbringing and attachment to ancestry,” Couchie says of her artistic practice. “My work has organically evolved into autobiographical interpretations stemming from my relationship with my elders and the effects society has had on their own traditions.”

Aylan was selected through NWIA’s board of directors voting process. Says NWIA Artistic Producer Erika Iserhoff, “Aylan is creating work that looks at current Indigenous issues and themes – residential schools, missing and murdered Aboriginal women, and Elder narratives. The selection committee was impressed by her commitment to these issues within a contemporary art practice, mainly through painting and sculpture.”

Previous: Cars in Northern Italy literally melt in heat wave
Next: A sophisticated guide that teaches Jill how to jack off