The multi-billion dollar film industry is “hungry” to get land in the Port Lands to build more studio space, but Toronto is scrambling to find sites large enough for their needs.

“I want to remind you there are customers who have to go away because we’re full,” Sarah Ker-Hornell, a member of the Toronto Film, Television and Digital Media Board, said at its June 10 meeting at city hall.

According to Ker-Nornell, studios need 10 to 15-acre packages that can be gated and fenced for security reasons.

“In this situation right now that we find ourselves in, we have clients at the gate, clamouring to come in … we need the space as quickly as possible,” Ker-Hornell told a panel of city planners who were at the meeting to present their Port Lands Acceleration Initiative (PLAI) Phase 2 to the board and “options” for studio expansion.

Planner Gregg Lintern told the board planners are aware of the need to accommodate more studios. “We really, clearly understand the immediate hunger for the use and the need and we’re being as permissive as we can from a planning point of view.”

But he added it’s difficult to find parcels that large. “It’s a challenging thing right across the City of Toronto. It’s very odd that you would find something that large in the central city.”

He also reminded the board that one of the problems facing development in the Port Lands is the fact that it’s in the Don River flood plain. He also pointed out long-term construction is likely to take place around the east Gardiner that will impact the Port Lands’ northwest sector.

“We’re trying to be realistic with you about your expectations … about the film industries and give you our best sense within that kind of permissive environment how you can begin to land some of these uses in the short-term,” said Lintern.

He said land is getting extremely expensive, a reason he cited as to why many studio spaces are “moving out. People are selling and those parcels of land are being used for something else.”

However, he added, TPL—which he described as the dominant landowner in the Port Lands— realizes film media’s importance and “we’re going to make room for the industry to allow it to grow.”

TPL chair Mike Williams said city planners are ensuring a significant amount of lands “remain zoned” for studio use. He said there is no constraint on what he called “permissible studio,” other than the challenges presented by the Don River floodplain.

He said the situation is more a case “of land assembly, people putting projects together, than it is permissibility.”

Ker-Hornell said the challenge is putting together land parcels for studios. She cautioned if film industry investors aren’t accommodated they’re going to invest in other jurisdictions. 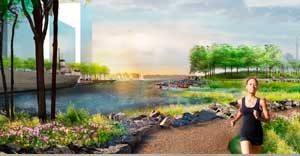