Man arrested in Robbery and Assault with a Weapon investigation, One man still outstanding

Posted by: Bulletin Editor March 22, 2019 Comments Off on Man arrested in Robbery and Assault with a Weapon investigation, One man still outstanding

The Toronto Police Service requests the public’s assistance locating a man wanted in a Robbery and Assault with a Weapon investigation.

It is alleged that:

– he was assaulted during the robbery with bear spray

– the mall was evacuated as a result of the bear spray

Kyle Eric Fraser, 23, of Guelph, was arrested. He is charged with:

There is still another outstanding suspect in this incident.

He is described as approximately 5’9”- 6’0”, 25-35, heavy set, short black hair and a black beard. He was wearing a grey and white track suit and white sneakers.

He was seen arriving and leaving in a white BMW 3-series with a sunroof and damage by the front driver’s side headlight. He struck another vehicle as he was fleeing the mall parking lot in the BMW. The BMW will have other damage on the front passenger side as a result.

Police are looking for any witnesses to this incident or anyone with information about the whereabouts of the outstanding suspect or the vehicle.

Anyone with information is asked to contact police at 416-808-3300, Crime Stoppers anonymously at 416-222-TIPS (8477), online at www.222tips.com, online on our Facebook Leave a Tip page, or text TOR and your message to CRIMES (274637). Download the free Crime Stoppers Mobile App on iTunes, Google Play or Blackberry App World. 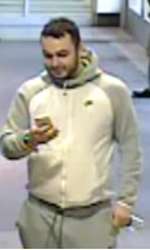 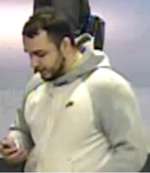