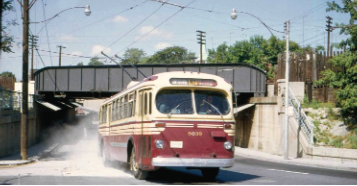 Electric-powered trolley buses used to grace our city and were able to move to and from the curve without halting all lanes of traffic.

The City of Toronto Aug. 16 released the latest set of data on the King Street Transit Pilot, a transit-priority pilot project on King Street from Bathurst Street to Jarvis Street.

The dashboard released shows:
• An 11% increase in all-day, weekday ridership with a 35% increase in morning commute ridership and a 27 per cent increase in evening commute ridership;
• An increase in transit reliability with 85% arriving within four minutes during the morning commute;
• An approximate 4- to 5-minute improvement in the slowest streetcar travel time during the afternoon commute;
• An increase in pedestrian and cycling volumes, consistent with seasonal changes;
• The ongoing ability of the downtown road network to absorb car traffic, even with an increase in seasonal construction;
• A [miniscule]0.3% growth in customer spending on King Street since the pilot began as compared to the same months from the previous year.

That set of data includes results from May and June of this year and is available on the city’s website at https://bit.ly/2MOGy6G.

“The King Street Transit Pilot demonstrates that we can move a larger number of people on the city’s busiest surface route, quickly and reliably, while managing the impact on drivers and local businesses,” said Mayor John Tory. “The city will continue to carefully measure this pilot to make sure that it works for more than 80,000 daily riders of the King Street streetcar and everyone who enjoys this vibrant part of our city.”

The pilot project is being monitored for impact on transit service, traffic flow on parallel streets and effects on pedestrians, cyclists and local businesses.

Take all that with a ton of salt:

King Street business owners I have personally spoken with generally abhor this stupid streetcar gimmick on a busy Downtown venue. And what we are seeing except for a half hour or so each way are monstrous sparsely populated streetcars. So many businesses are made to suffer when it’s the streetcars that clog traffic, not the cars.

Streetcars are an idiotic form of big-city transit unless they’re on non-major roads. And even then they’re just stupid ways to keep the manufacturer, Bombardier, in business at your expense. Buses and trollies make sense because they have tires so they can move to the curb for passenger pickups/departures and let motor vehicles continue rolling.

Do you agree? Let me know. And, by the way, try finding a photo of those old Toronto trolley buses which were still in service when I moved here in 1961.

Their images have been scrubbed off the Internet as if they never existed. Don’t you wonder why?