Insane policy as closest US allies are supporting ISIS

Posted by: Bulletin Editor March 25, 2015 Comments Off on Insane policy as closest US allies are supporting ISIS

And it’s true that the U.S. knowingly supported Al Qaeda in Libya in order to topple Gaddaffi. But that was on the QT. 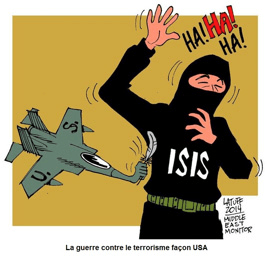 Initially, Barak Mendelsohn – an Associate Professor of Political Science at Haverford College, a Senior Fellow at the Foreign Policy Research Institute, and a five year veteran of the Israeli army – argues in the Council on Foreign Relations’ publication Foreign Affairs  that the U.S. should support Al Qaeda … as a way to counter ISIS:

The instability in the Middle East following the Arab revolutions and the meteoric rise of the Islamic State of Iraq and al-Sham (ISIS) require that Washington rethink its policy toward al Qaeda, particularly its targeting of Zawahiri.

Destabilizing al Qaeda at this time may in fact work against U.S. efforts to defeat ISIS.

Many mainstream players are suggesting that Al Nusra – the main Al Qaeda group in Syria – “re-brand”, so that it can pretend it is moderate … and so receive direct U.S. backing. See this, this, this, this, this and this.

Not to be outdone, influential New York Times columnist Thomas Friedman asks if we should arm ISIS to counter Iranian influence.

At best, this is an insanely stupid strategy.

Previous: When was your environmental awakening?
Next: How the US government and US military became Murder, Inc.