House of Providence served Toronto poor of all faiths

Posted by: Bulletin News October 8, 2014 Comments Off on House of Providence served Toronto poor of all faiths

By the 1850s Toronto’s meagre social and charitable services were becoming almost unmanageable.

This was the era of mass immigration, and thanks in part to the railroad, the city was flooded with newly arrived Europeans looking for a better life. The majority of these immigrants arrived with nothing but the clothes on their backs, and many were struggling with disease.

At the same time Toronto was experiencing a boom and bust economy, making many of the working class vulnerable to malnutrition and forcing them to drink contaminated water, which lead to cholera outbreaks.        Slums bursting with 1-room shacks that held 30 people each began to spring up in the back alleys of already overcrowded neighbourhoods. The city’s answer to these new industrial-age problems had two stages. The first being to expand publicly supported initiatives, like the re-establishment of the Toronto General Hospital on Gerrard east of Parliament, and the second was to build new schools, hospitals and residential homes sponsored by various religious groups.

Inner city Irish Catholics were suffering the most. After fleeing the potato famine back home and arriving in Toronto, one third of the city’s growing population was now of Irish descent.

Although some of Toronto’s wealthiest and oldest families were of Irish descent, they were Protestant, and the newly arrived Catholics were not greeted warmly by the old guard.

Not allowed to live anywhere near their Protestant forebears, the Irish Catholics settled in the east end around the mouth of the Don River. These neighbourhoods would eventually take on the nicknames Slabtown, Paddytown, Corktown and later on with the planting of cabbages in their yards, Cabbagetown.

To take care of their needs, the Roman Catholic Church built one of the most important institutions in Toronto’s history, the House of Providence. Although the Sisters of St. Joseph were its administers, the House of Providence served without prejudice of religious background, and for the next century, it provided shelter for the elderly, poor and orphaned.  The Sisters of St. Joseph were founded in France in 1650 by six women who shared a desire to serve God and the poor of their district. During the French Revolution (1789-1794), thousands of French citizens were thrown into prison, including four Sisters of St. Joseph because religious communities were forbidden by the state. 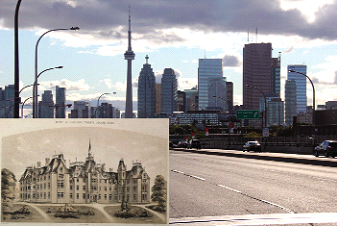 House of Providence and Richmond St. then and now.

However, one of the sisters—Sister St. John Fontbonne, who was incarcerated and in line to be guillotined—was ultimately spared when the revolution came to an end. In 1807 she refounded the Sisters of St. Joseph in Lyons, and by 1836 six Sisters of St. Joseph were sent to St. Louis, Missouri, and then to Canada. On October 7, 1851, four Sisters of St. Joseph arrived in Toronto to run an orphanage, and over the next few years, the Sisters looked after the needs of the poor, homeless, sick, imprisoned and newly immigrated.   Magnificently designed by architect William Hay, the House of Providence opened its doors in 1858. It sat in the middle of a huge park south of the still standing St. Paul’s Roman Catholic Church (Power Street east of Parliament) with which it was affiliated.

It was built to look like a 16th century renaissance palace with wings three stories high and high roofs with dormer windows surrounding a 4-storey centre block. It was through the doors of this majestic structure that many new immigrants to Toronto first experienced Canadian benevolence. With its castle-like appearance designed to give comfort to the homesick immigrant, the House of Providence would provide housing for some 700 elderly residents, orphans and society’s most vulnerable people.

The medical functions of the House of Providence were eventually taken over by St. Michael’s Hospital on Bond Street, but its continued use as an orphanage and school lasted until its demolition in 1960. It was torn down to make way for the Richmond Street ramp to the Don Valley Parkway and Gardiner Expressway.

Although its original building is long gone, the House of Providence continues its functions today at its present site, built in 1962 on former farm land owned by the Sisters of St. Joseph at the corner of Warden Avenue and St. Clair Avenue East, under the name Providence Health Care.

Join me Friday Oct 31 at 8pm for a Halloween after hours tour of St. Lawrence Market including a frightful snack buffet, wine and cheese. $60 per person. Contact Gabrielle Bright at 416-860-0727 or email gaby.marketkitchen@gmail.com and visit BruceBellTours.ca for more info.

Previous: Tory would be respectable mayor, but we need more
Next: John Tory is the perfect fit for this highly visible job