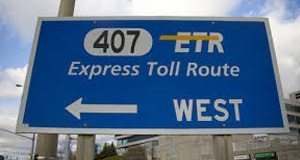 You can drive the 400 mile length of the New York Thruway (I-90), from Buffalo to New York City , a toll road with fully staffed toll booths, for peanuts. Actually 2.1 cents per km. No accounting fee and no video fees.

Then there is the cost of driving across the top of Toronto on Hwy 407 everything is electronic and automated, drivers pay for the camera operations and the billing costs in addition to the exorbitant toll rates… and the Ontario Gov. acts as ‘enforcer’ in collecting the unpaid tolls!!

Even Al Capone and his crew never had it as good as this during the bootleg liquor days of the 1920’s and 1930’s!!  It is very expensive to travel this road!

In the early 1990’s Ontario was almost bankrupt under Bob Rae’s NDP government.  But it desperately needed new roads, as it still does today. So the Rae government built a toll road around Toronto and it was a great success. It was a cash cow called the 407 ETR.

The Conservative government of Mike Harris then later foolishly leased this road for 99 years to a Quebec-based company for a substantial amount of money. This was in May 1999, and was done to reduce the deficit and look good.

Before the Harris government could lease the road, however, they had to pass new legislation to allow this, because never before had a ‘public road’ been sold to a private company. This very flawed legislation was passed in November 1998. The new Quebec owners then closed the deal and Ontario had ‘sold’ it’s first highway.

This Quebec company then sold the road at a profit to Spanish owners, thus assuring that profits from the road would never be taxed in Canada.

As part of this deal, the Ontario government agreed that individual license plate renewal would be denied if there were any outstanding tolls against that plate and it’s owner. So this arrangement, in practice, made our government a collection agency for a privately held, for-profit foreign consortium. In addition, the terms of the deal stated that there would be no statute of limitations on these bills and that they would never go away even if the citizen went bankrupt.

Even your income tax has a statute of imitations.

The 407 ETR refuses now, as then, to produce any photographic or other evidence, that what they bill is an accurate reflection of the offending vehicles presence on their roadway. So there is no accountability and OUR Government still collects the SPANISH bills for them. Oh, I forgot to mention that the Spanish company decides on the interest rate on these forever bills and currently it is 26.82 per cent compounded monthly but it varies based on the whims of the Spanish owners.

And there is a definite problem with who gets billed. In very short order after the sale of the highway, according to the media of that time, 100,000 citizens who had never been on the road had been incorrectly billed. The MPP’s were deluged with complaints and so the Conservatives under then transportation minister David Turnbull told the private Spanish company to clean up their act. Until there was evidence of that happening their collection deal was cancelled. This was in 2000. But in 2005 the 407 ETR went to court to reinstate its original sweetheart deal. The judge ruled in its favour even though this company still showed no accountability and still did not produce evidence of the legitimacy of it’s charges.

The government of Premier Dalton McGuinty should have appealed this decision but did not.  Now the government is the collection agency for the Spanish consortium.. Now the agreement covers any vehicle that is owned by the person who has an offending license plate. So if you own six vehicles and one of them is alleged to have been on their road, your government will not issue any license plates for any of your vehicles until you pay the ‘alleged bill’ at your government license office, whether it is correct or not.

That is far beyond the rate of inflation and there is no control on how much this foreign company can charge.

The tolls here are higher than anywhere that I travel. This road is simply built through corn fields, whereas in Mexico or Italy there are mountains, tunnels, bridges, etc., and still those countries have tolls that are substantially lower.  You can travel from here to Los Angeles for less toll than it costs to cross Toronto.

I believe the current toll in Mexico is 13 cents per kilometer, but that includes automatic medical coverage for everyone in the vehicle.

With all the road tax that we Ontarian’s pay, the last thing we ever expected was a toll road.  We need to buy back this road and break the deal with this consortium.

I find this whole arrangement both offensive and intimidating.

STAY OFF THE 407 AND STARVE THEM OUT OF EXISTENCE!!!

SPREAD THIS INFO TO EVERYONE YOU KNOW.

Previous: GTA home sales increase by 9.6% over early May 2014
Next: Downtown creates 51% of Toronto’s productivity

Ford gets it right to shrink Toronto City Council