Posted by: Bulletin Editor May 27, 2015 Comments Off on Downtown creates 51% of Toronto’s productivity

The Cabbagetown Preservation Association held its annual meeting on May 19 at the Riverdale Farm Meeting House. As always, the highlight of the evening was the presentation of Peggy Kurtin Award for Excellence in Restoration, named after Peggy Kurtin (1932-2009), a former CPA president who, for many years, was the driver of heritage in Cabbagetown. 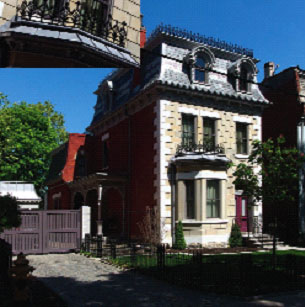 The award recognizes efforts to maintain the historic context of Cabbagetown, and to encourage homeowners to refine the quality of the community streetscapes.
This year’s award went to 377 Sackville St., the Shields House, an Empire-style home built in 1876-77 by Bryce and Hagon builders for Francis Shields, a drover and dealer in livestock. It is now owned by James Davie and Mark Hendricks who undertook renovation and restoration with architect Monica Kuhn, Weenen general contractors, and Trinity Custom Masonry. The house has a unique stone facade, which was preserved in restoration, and is thought to have been applied later over the original brick cladding. Design work began in 2012, construction was completed in 2014 and landscaping will be completed this summer.

Gilles Huot announced that after a hiatus last year, the CPA has decided to run the venerable (36-year-old) Cabbagetown Tour of Homes on a biennial basis. This year’s Tour is scheduled for the Sunday following the Cabbagetown Festival (the third Sunday in September). The CPA also runs other popular programs including Cabbagetown People which commemorates the and Hidden Gardens and Private Spaces Tour of the landscaping and design gems which are to be found in the back lanes and gardens of the neighbourhood. This year’s tour is scheduled for June 7. 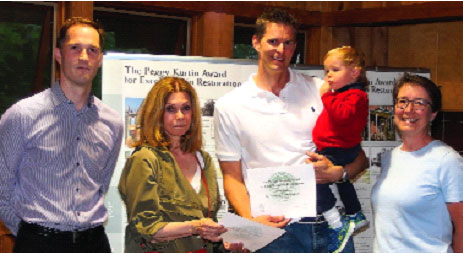 Concern was also raised over the progress of the new splash pad that is now under construction at Wellesley Park, site of the just-concluded Forsythia Festival. At present the site includes a bright blue tarpaulin roof about fifteen feet high which is clearly visible from Parliament St. However the city has assured The Bulletin that this is a temporary gazebo to shelter the work in progress and that the real pavilion sails will be far more aesthetically pleasing.

The evening was concluded with a wide-ranging presentation by Harold Madi, Director of Urban Design of the City of Toronto, who gave an overview of the massively accelerating growth of the Downtown core (which with 3% of the land area of Toronto produces 51% of GDP, while the population of the core has doubled, mainly in the last decade, while the growth rate Downtown is currently four times that in the rest of the city). He drew attention to the overwhelming use by Downtown residents of walking/cycling (41%) and public transit (34%) over private car (25%), as opposed to areas outside the core where dependence on the car can run upwards of 80%. Madi also discussed the planned growth of heritage conservation areas in the core, underlined a new emphasis on “cultural landscapes” and noted a desire on the part of Urban Design to discourage “facadism” in favour of preserving heritage buildings intact while developing within the footprint.

2015-05-27
Bulletin Editor
Previous: Highway 407 is a rip-off with high fees and no benefits to Ontario
Next: Will only the poorest kids attend our public schools?