Posted by: Bulletin Editor November 27, 2011 Comments Off on Founder’s dinner at Corktown schoolhouse to honour Crombie

His brewery burned down and he went bankrupt. But that didn’t keep Englishman Enoch Turner from bouncing back and establishing a school for Toronto’s poor children in Corktown 162 years ago.

That one-room school on Trinity St. near King still stands, and on Dec. 2 it’ll be the venue for the annual founder’s dinner hosted by the Enoch Turner Schoolhouse foundation.

“He was a great philanthropist known for his generosity,” says Alison Little, site coordinator at the schoolhouse.

The dinner’s theme is “A Taste of Victorian Life” and features roast beef—the very same dinner Turner threw for the school’s children and their families, many of them destitute, in 1849.

Turner arrived in Canada in 1832 and opened a brewery at Front and Parliament. One year later “it burned to the ground,” says Alison Little. But the community gathered round to get the brewery re-funded and back up and running. 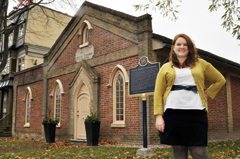 The York Circus with clowns, acrobats and horseback riders even held a benefit performance for him. “Obviously, a brewer was an important person in the neighbourhood,” says Little.

A neighbourhood sprung up around Turner’s brewery, and in the 1840s the number of factories “skyrocketed,” says Little. There were cork makers, tanneries, lumber mills, steel mills, and a “lot of smoke in the air.”

The Don River, with industrial runoff upstream, was “an open sewer.” At its mouth cattle waste piled up so deep a channel had to be cut through it. “It was messy, undesirable. It wasn’t a nice place to live,” Little says.

Many Protestant Irish settled in the area, thus came the moniker Corktown, named after the County of Cork in Ireland. But in 1847 there was “a massive influx” of Catholic Irish fleeing the potato famine. Thirty thousand arrived in Toronto.

Torontonians feared them, scared they would bring disease—which they did in the form of typhus. “Fever sheds” went up at King and John to house the sick.

Shortly after the influx Turner raised money and put up some of his own to build his schoolhouse that opened in 1849. It was a long, narrow room, crowded with an average daily attendance of 91 children.

Children back then didn’t attend school for months on end as today’s students do. They worked part of the year in factories where they were given “the most dangerous and throwaway jobs,” says Little—tiny fingers could fit easier into clanking machinery to fix a problem.

For more information about the dinner call 416-392-6997, or e-mail amcarty@enochturnerschoolhouse.ca. Proceeds support the school’s education program.

Previous: Cabbagetown co-op turns 30 in century building
Next: The time for planning is now