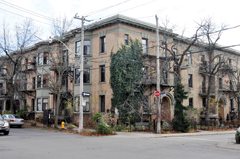 The Three Streets housing co-op in upper Cabbagetown is celebrating its 30th anniversary this year in tandem with the 100th anniversary of the three-storey building (called Hampton Mansions) it occupies at the southeast corner of Winchester and Metcalfe streets.

On Dec. 11, building residents will gather to mark the two occasions with light refreshments and to listen to guest speakers Toronto Centre-Rosedale councilor Pam McConnell, Cynthia Wilkey (one of the co-op’s founders who has researched the building’s history extensively), and Brad Reed, one of the original co-op members.

Catherine Tammaro, president of the co-op’s board of directors, says the building has a wide mix of member-residents including families with little children, young professionals, singles and seniors. Units are available at market and subsidized rents, and one is reserved for a member with HIV related issues.

The building was constructed in 1910 and 11. It became a member-run, non-profit cooperative in 1981 after residents fought for almost two years to prevent a small consortium of business people from turning it into luxury housing—which would have meant “expensive” housing.

Hampton Mansions was purchased with help from Canada Mortgage and Housing Corporation’s co-operative housing program. Echoing Wilkey’s research, Tammaro says the building “was a stately, middle class apartment building of its day.” And it still is.

Its exterior yellow brickwork has been cleaned and its chestnut woodwork, original gas fireplaces, lanterns, and dumb waiters have been retained, although the latter three are non-functional due to today’s fire regulations. It’s also kept its marble stairs.

Tammaro points out the building was designed efficiently and elegantly, allowing refreshing breezes to pass through the apartments on hot summer days.

Because it’s a co-op, member-residents give their time to help with a multitude of tasks, including serving on the board, and on the social, landscaping, newsletter, finance, and maintenance committees.

With the wide demographic range of residents and the fact everyone helps where they can, Tammaro calls Hampton Mansions “a kind of a familial community.”