Posted by: Bulletin Editor September 23, 2017 Comments Off on Charge smokers a deposit on filter tips

Filtered cigarette butts are a blight all over the city. Smokers are often and rightly castigated for irresponsible and polluting misbehaviour.

Many smokers are oblivious to the nuisances they present in quenching their nicotine addictions. They 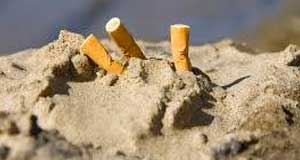 flick away their butts with élan, like royalty dismissing commoners, and present the trash from their cravings for society to deal with—if at all.

Filter-tip cigarette butts are persistent and don’t decompose on anything close to a short-term cycle. They can remain in the environment for years. You see them everywhere.

Few smokers would pocket or properly dispose of their butts, barring anything less than a severe fine or some other incentive.

The same is also true of the packages in which their nicotine-addiction devices are sold.

Since smokers are unlikely to ever police their own butts, it behooves us to think of another solution.

Fortunately, there is a model that would work with cigarette filter-tip butts and packages.

I propose that Ontario (and, for that matter, all provinces) establish a refundable deposit both on cigarette packages and filter tips.

The actual tobacco-and-paper portion of a cigarette isn’t a problem since it biodegrades.

But packages and filter tips can and do stick around for years. A 25¢ deposit on the cigarette package would be reasonable.

So if a cigarette filter has a 5¢ refundable deposit, that will inspire the same individuals who collect and redeem beer, wine and liquor bottles to include policing cigarette butts and packages.

Cigars, unless they have a plastic bit or filter tip, aren’t a problem since they, too, biodegrade. Add another nickel deposit for a plastic cigar tip.

Previous: Is an official Toronto condom next?
Next: I wish he’d taught me at Harvard Medical School