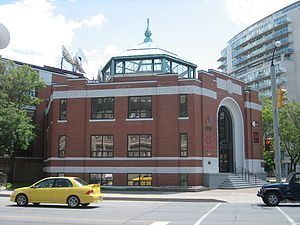 The property, considered one of the prime development sites in Toronto’s West Harbourfront neighbourhood, is suitable for residential and commercial development.

“545 Lake Shore and the urban lakeside community in which it is located offer our company yet another opportunity to bring positive change to one more iconic Toronto neighbourhood through distinctive design and smart urban planning,” says Ben Rogowski, Canderel’s Chief Operating Officer. “With an unparalleled location, which already provides a host of residential, commercial and recreational amenities, we are confident that we will be able to create something truly distinctive in this lakefront community.

“We look forward to working with our consultant team, members of the neighbourhood, city staff and area politicians, over the coming months, to create an exciting new future for the site.”

The property, which is bound by Lake Shore Boulevard West, Bathurst Street and Queens Quay, is just steps from the Billy Bishop Airport. Positioned at the western edge of Queens Quay, the location will benefit greatly from an ongoing, $128 million revitalization of the avenue, which includes wider granite sidewalks, separated bike paths, and additional landscaping improvements.

An award-winning developer with projects across Canada for nearly two decades, Canderel has been responsible for the creation of some of Toronto’s most iconic residential developments.

Considered to be the among the earliest pioneers in the revitalization of the city’s burgeoning King West neighbourhood, Canderel has marketed, sold and delivered over 7,500 condominium suites in Ontario. The developer is responsible for such high profile projects as the Massey Harris Lofts, DNA1, DNA2 and DNA3 condominiums.

In Toronto’s College Park community, the award-winning company developed the Residences of College Park 1 and 2, and Canada’s tallest condominium tower at 80-storeys, Aura, totalling nearly 2,200 suites in the block. Canderel is building its latest project close to College Park called YC Condos which was the city’s fastest selling project of 2015, while currently working with the City of Toronto to complete the revitalization of a 3-acre urban park in the heart of the neighbourhood.

“Canderel has always successfully identified strategic sites in Toronto” says Ben Rogowski. “We have already begun developing an initial vision for the revitalization of 545 Lake Shore, and we look forward to presenting our plan shortly.”