Bell in Brief: Edifices at King and Yonge, once noble, now retail

Posted by: Bulletin News April 18, 2017 Comments Off on Bell in Brief: Edifices at King and Yonge, once noble, now retail

These photos of corner of King and Yonge streets (one from 1937 and the other from today) illustrate the passage of time.

The black and white photo shows a small portion of the Canadian Pacific building behind the newspaper kiosk.

Still standing today on the SE corner of King and Yonge, it was the tallest building in the British Empire when it opened in 1913. Its once opulent ticket office (on the ground floor) is now home to a Shoppers Drug Mart location.

The building across the street–with the enormous Corinthian columns–is the Royal Bank building which dates back to 1914. While the building remains standing, its once-grand banking hall on the ground floor was demolished in 1964 and is now a Sleep Country store. 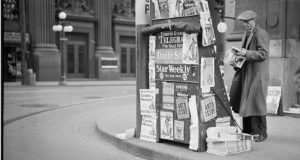 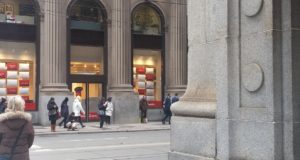