Universal Music Canada (UMC) President & CEO Jeffrey Remedios has announced his company’s visions for their place in the city and artist community as they relocate to a new site at 80 Atlantic Ave. in Liberty Village.Toronto Mayor John Tory offered comments of support for several of UMC’s initiatives and Toronto-based rock quartet The Beaches performed for the audience of industry partners, media and UMC head office staff. Emcee of the proceedings was Toronto’s own Kardinal Offishall, UMC A&R executive and recording artist.

From stage adjacent to the construction site, Remedios illustrated UMC’s visions for a major label transforming to a music-focused media company whose address could become as rooted in Toronto’s character as the Capitol Records tower in Los Angeles, Motown’s house in Detroit, Chess Records in Chicago, or Factory Records in Manchester. A music company as community hub for artists, media partners, and music audiences. Remedios espoused the importance of creating a “sense of place.”
“80 Atlantic will mark a new phase in the growth and evolution of Toronto’s music community, enabling artists to fully refine their craft here at home rather than resorting to exporting it raw for others to finish before bringing to market,” remarked Remedios, who went on to list features such as recording and performance facilities, retail opportunities, and artist promotional spaces currently in the design stages.
Remedios also introduced Toronto Mayor John Tory who, while on an entertainment industry trade mission in Los Angeles in February of last year, met with Remedios and Universal Music Group Chairman and CEO Lucian Grainge to discuss the evolving role of major labels, the benefits of designating Toronto as a Music City, and the proliferation of exceptional, internationally-recognized musical talents emanating from Toronto which shape culture globally. “It’s great to be here to celebrate with Universal,” said Tory from the podium, “and Universal is a company that’s being innovative…this is the kind of creativity and innovation that I want to see in every corner of Toronto,” adding “I want to salute Jeffrey Remedios in particular, as someone who’s been an activist, an advocate, in various contexts for the music industry.”
Currently under construction in partnership with owner-developer Hullmark and architectural firm Quadrangle, 80 Atlantic marks Toronto’s first timber-frame commercial building to be built in a generation and it will comply with our city’s progressive Toronto Green Development standard.
UMC’s new offices will be at the heart of a culturally relevant community, within blocks of print, online, and broadcast media partners, music licensors and digital distributors, social media platforms, instrument makers, and music associations – as well as being steps from Toronto’s entertainment districts and many of its concert venues. The move is expected to be complete in late 2018. 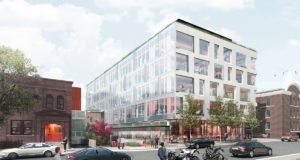 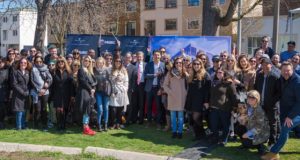