Posted by: Bulletin Editor November 28, 2010 Comments Off on Corktown committee ‘not anti-development’ in lead-up to 2015 housing projects 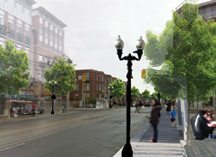 A rendering of a potential future King St. at Sumach recommends that the city integrate the intersection into the Cherry St. treatment in conjunction with new streetcar line to West Don Lands.

The residents of Corktown will not let an opportunity pass without seeing it to the fullest potential.

This was the message of the latest public meeting of the Corktown Residents’ and Business Association (CRBA) in regard to the Toronto 2015 Pan-Am Games. The lead-up to the event will bring about a myriad of changes to the area, and residents want to be involved in actions that will last well beyond the two-week event.

In an effort to maximize the investments being made by the city prior to the summer of 2015, the CRBA’s development committee, also known as the Corktown Development Board (CDB), offered an idea of the area no longer marred by barren streets, empty spaces, and unattractive facades.

Distillery resident and CDB member Laurence Lui was part of the presentation.

“We have to be prepared and pro-active to take advantage of what will happen,” Lui explained in an interview following the meeting. “Usually we talk about community in response to a problem, reacting to what is going on. We want to inspire the community to think beyond little issues work towards a vision.”

The orphaned space under the Richmond and Adelaide off-ramps presents an opportunity for planners.

The Distillery District and surrounding blocks have already been chosen as the site of the athletes’ village for the Pan-Am Games. While the event does not receive the high esteem of an Olympiad, it still wields the same socio-economic and geopolitical impact of recent winter Olympic games in Vancouver, while welcoming a greater number of participants.

The presentation outlined the potential for Corktown, stressing four themes: defining streets, restoring orphaned spaces, attracting new residents and business, and creating public areas. Queen St. E. and King St. E. are to lead the identity for the neighborhood, while using forgotten spots will form desirable destinations, as seen already in the recently unveiled Underpass Park. Another example of the envisioned changes can be witnessed in the newly opened dog park on Power St.

While the biggest problem facing the group is finding funding, a unified communal voice should garner the necessary attention and support. According to Liu the response was positive—but the passionate group is prepared to persuade others who may be hesitant.

“There is an element of the community that feels this isn’t the solution to our problems, such as crime issues,” said Lui. “But we can create a more positive discussion about problems if we improve the look and usability of undesirable areas.”

The meeting was merely the first step—a plan to plan, so to speak—meant to tantalize residents with possibilities. The next move is to form a coherent and focused message in order to work efficiently with developers when the time arises. Some opportunities have come and gone; Power St. was well received, but at least one other development left more to be desired.

“This past summer Parliament St. was redone, but without community input,” said Lui. “We’re not anti-development, we just want to make sure we are involved and that they don’t go ahead and build without addressing certain areas.”

Lui and the CDB are planning a meeting with students from Ryerson to generate new ideas. The committee also plans to continue working with Toronto Centre MPP Glen Murray through existing lines of communication.

The next CRBA meeting will be held on Dec. 7.