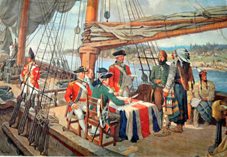 Lord Dorchester, on board the British navy ship HMS Seneca, completing the 1805 Toronto land deal with the Mississaugas.

It’s 205 years late, but the Mississauga Indians have received $145 million for the Toronto Islands and the land on which Toronto now stands.

That’s better than the ten shillings the British paid them for it in 1805. The updated payment was made to the Mississaugas near Hagersville (outside Hamilton) by the government of Canada on Oct. 29.

Chief Bryan LaForme was in Toronto Nov. 25 for an assembly of Ontario chiefs. He told The Bulletin the Mississaugas plan to spend part of the money to buy land or a building in Toronto to house First Nation agencies.

“It’s mostly to have a presence in the city. That’s important. This is our traditional territory.” He said there are up to 80,000 First Nation people in Toronto “and they’re virtually invisible.”

LaForme said he didn’t have any specific locations in mind but his community will hire realtors to help them look at sites early in the new year.

The Mississaugas occupied lands on the north shore of Lake Huron when they first encountered Europeans in the early 1600’s. Over time, they became involved in the fur trade.

Although originally allies of the French, the Mississaugas were motivated to side with the British after the French were defeated at Fort Niagara in 1759. Then came an influx of British settlers resulting in land deals between the British and the Indians.

According to a June 2003 document from the Indian Claims Commission, the 1805 Toronto purchase is couched in confusion. “Did the Mississaugas believe that the Toronto Islands were part of the purchase, or did they believe that the islands were specifically excluded?” posited the commission.

In the end, today’s Mississaugas acquiesced that the islands were part of the deal. LaForme said the decision was made in the best interest of his people.

Continuing to argue over the islands would have meant “all offers would have been off the table” in terms of reaching a monetary settlement, LaForme told The Bulletin.