Posted by: Bulletin Editor October 1, 2013 Comments Off on Corktown calls for safer shortcut at Richmond St.

The Corktown Residents’ and Business Association (CRBA) has submitted an application to the city to have a paved sidewalk and lighting installed just north of the Richmond St. E. overpass between Power St. and St Paul St.

The embanked approach to the overpass begins at Power and Richmond, rising rapidly by the west end of St Paul. There is currently a beaten path skirting the southern edge of St Paul’s Basilica grounds and St Paul’s Catholic schoolyard. 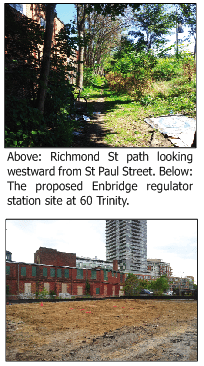 It is tree-lined and quietly bucolic and is used heavily by local residents, however it is also narrow, uneven, strewn with tree-roots and rubbish, unlit at night and attractive to unsavoury elements.

The CRBA and the Gooderham and Worts Neighbourhood Association have both raised concerns about the freshly-graded flat brown field at 60 Trinity St just south of Mill, where the Distillery Gate-house used to stand.

The neighbourhood associations were advised by Pam McConnell’s office that the property, owned by Enbridge Gas Distribution, was to be developed into a service facility, that they were hoping to receive plans in the near future, and that they would be scrutinizing them closely to ensure that the built space and its uses would be compatible with the residential and heritage nature of the district.

An Enbridge spokeswoman has informed The Bulletin that although design is still in early stages, that the company is currently installing a new pressure regulator station at 60 Trinity to meet growth in the area (gas distribution is done via pressurized pipelines, and regulating stations are needed at intervals to maintain local pressure in the system).

Chris Meyer said, “We anticipate installing the new station sometime next year and Enbridge will consult with the City of Toronto and Waterfront Toronto about the design of the station including landscaping so that it fits in with the community.”