As I mosey through St. Lawrence Market on my daily guided tours, the one question I get asked most by local and foreign tourists alike is: Are there any ghosts here?

As a somewhat a skeptic in all things occult I would often answer, “Not that I know of.” That was until a few months ago.

In the basement of the Market today, according to the original architectural plans, are the remains of an old jail built in 1844 when Toronto’s second  City Hall used to stand there. In 1899, City Hall was relocated to larger premises at Queen and Bay, now Old City Hall.

Today not only does the original council chamber still exist (as the Market Gallery) but also scattered throughout St. Lawrence Market are miscellaneous bits and pieces of that former city hall, including the bricked-in doorway to what was the mayor’s office, a few old fireplaces and ancient chimneys embedded into the walls.

However the one spot that has everyone holding their breath is the remains of the old jail in the sub-basement, still with rusted metal anchors rooted into the stone that held the prisoners. 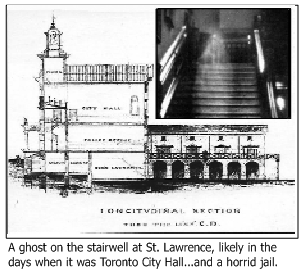 Devoid of any light, fresh air or clean water, jail conditions in 19th-century Canada were so appalling that even Charles Dickens on his visit here was so disgusted at the way we treated prisoners he once wrote that its much worse here than in England, which itself is absolutely wretched.

A few months ago while conducting a tour I was in the former prison in the basement of St. Lawrence Market when a guest asked me if I had ever seen any spirits. As I was about to say no, the camera she was holding went flying out of her hand, the lights started to flicker and a loud banging noise was heard coming from behind the bricked-in doorway. I stood silent and said, “I have now.”

According to the Ontario Ghosts and Hauntings Research Society, the last word in paranormal activity in Toronto, there has never been a documented case of a ghost sighting at St. Lawrence Market, so maybe all that is about to change.

I decided to do some digging around, ask a few questions and see if anyone else at the Market has ever felt an unholy presence roaming the ancient hallways.

Toronto’s most famous apparition is that of Dorothy the ghost of the Hockey Hall of Fame who worked as a teller when the Hall was a Bank of Montréal branch back in the 1950s. As the story goes, Dorothy was so distraught over a love affair gone wrong she went upstairs and shot herself. Today people claim to see a spirit of a women floating high above the Stanley Cup. Does St. Lawrence Market have its own “Dorothy”?

Upstairs in the Market Gallery (the former Council Chamber 1844-1899) where wonderful exhibits detailing Toronto’s long history can be seen, a few workers have told me sometimes when its really quiet footsteps can be heard coming up the stairs but when investigated to see if anyone is there, the stairwell is empty.

Also, for no apparent reason the lights will go out and the 150-year-old floorboards will start to squeak where no one is standing.

Could this be the ghost of some poor wretched soul who found themselves chained to the wall in the basement a century and half ago, or someone or something from our past coming back for revenge?

While maybe a hundred or so people were condemned to death in the courtroom that also used to be in the basement of the old city hall—or died while being chained to the wall—the spirit of St. Lawrence Market could also be the ghost of John Hutchinson Toronto’s 13th mayor who mysteriously disappeared one dark and stormy night and was never heard from again.

John Hutchinson was born in Scotland in 1817 and moved with his parents to Montreal in 1828 and came to Toronto in 1847 where he opened an importing business on Church Street just north of Front Street. For the next 10 years as his business grew Hutchinson started to take an active part in the political and social affairs of the city. In 1857 John Hutchison was elected Toronto’s 13th mayor, a foreshadowing of things to come for that same year the worst economic crash to hit Toronto and the rest of the world up to that date also occurred.

In 1857 the newly incorporated City of Toronto was a mere 23 years old and thanks to the railroad had just witnessed an enormous growth period. But in spite of this Mayor Hutchison sat in his office in the west wing of City Hall on Front Street and faced his darkest hour.

The economy, once surging, was now collapsing. The great city works project of building a “Peoples Esplanade” along the harbour fell through when the Railroad threatened to build along Queen Street if they couldn’t have the right of way along the harbour. Despite a public outcry, the railroad won and under Hutchison’s Council received thousands of acres of land along the waterfront once destined for parkland.

Regardless of the railroad’s promise to invigorate the economy, the city was suffering through the worst economic depression in its history.

There was only one thing for Mayor Hutchinson to do: resign or lose everything; his reputation, his once-thriving import business and the block of buildings that he had named for himself on Wellington Street.

So Hutchison left office under a cloud of scandal because of his directorship in the Toronto and Sarnia Railroad Co. was going to personally gain from the land grants given over to the railroads?

Hutchison, who never married and had no children, left for Montreal and was never heard from again. Some say the unexplained noises coming from the west stairwell of the Old City Hall at St. Lawrence Market, and the loud clanging noises that go thump in the night are all made by the ghost of John Hutchinson coming back to say he’s sorry for the havoc he was partly responsible for during one of the darkest times in Toronto’s history.

Phone 647-393-8687 or visit me at www.brucebelltours.ca for more info on these two special events