After more than two years of traffic snarls in the Distillery District life suddenly got better in mid-November for the District’s residents and shoppers, especially for those who drive. 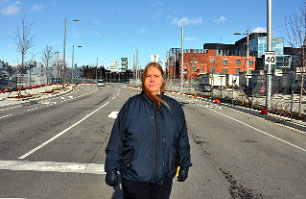 On Nov. 17 fencing that blocked the road and a sidewalk along a section of Cherry St. between Eastern Ave. and Mill St. finally came down after the city and the province reached a long-awaited agreement that conveys that section of the road from the province to the city.

“It’s definitely traffic relief, but also pedestrian relief. We’ve never been able to walk straight up to King St. or to Queen St. to catch the streetcar and now we can. That’s a big plus for us,” said Jane Robinson who serves on the Gooderham & Worts Neighbourhood Association’s development committee.

Councillor Pam McConnell, whose ward includes the Distillery District, said in an interview that things moved fairly quickly once she got Toronto’s deputy city manager talking directly to the head of Infrastructure Ontario.

Up until then “it had been a huge, colossal red-tape exercise,” said McConnell. “For the longest time people on both sides were just in a ‘no’ mode. What we needed to do, and what I needed to do, was get the right people into the room that could say yes,” McConnell said.

Holding things up was the fact the roadbed was contaminated.

“To be fair to both sides and both governments we’d never had a situation where we were conveying from an owner to the city of Toronto a street that was contaminated,” McConnell explained. For more of the story, visit https://thebulletin.ca/?p=21506.

“Once you have contaminated soil in a roadbed anytime you dig there’s a protocol and a requirement as to how to deal with the soil that you’re digging. But even if you don’t dig you have to have a yearly reporting in to the Ministry of the Environment,” said McConnell.

The question for the city was did it want to take a dirty roadbed with no ability for compensation if it had to dig down to do utility or repair work and also take on the cost burden of the annual environmental review.

The soil does not to be remediated. McConnell said a plan is in place where a roadbed can be capped to keep it from being an environmental hazard. “But the minute you pierce that capping there’s financial exposure. Who then does the cleanup,” said McConnell.

At the end of the day the city and the province reached a saw-off, according to McConnell.

“In a sense we were trying to share the financial exposure, not give it away to city taxpayers from the provincial coffers. That was the discussion that had to happen and it had to happen in order to protect the city from being on the hook in perpetuity for very large costs to maintain this road,” said McConnell.

The TTC tracks on Cherry St.’s east side will stay fenced off because overhead wiring still needs to be installed. As soon as the PanAm Games are over and buildings there are repurposed then the tracks will open.

Robinson received lots of emails from residents after Cherry St. re-opened. “They were happy that it’s finally done and about time.”