Visiting artist Ramona Zoladek came into the gallery just as ‘the limits of control’ was ending.  She asked if her sculptural work, combining plaster and concrete forms with living plants/seeds, might be compatible to exhibit.  Considering examples of her work we invited her to create seven vertical forms, three to be placed outside in front of the gallery and four to be used in the interior.  Ramona was able to complete and install these forms during her two week stay in Toronto before returning to England where she will resume her work.  The columns placed, each in one of the four directions, are the cornerstones of the present exhibit entitled, s t e a d f a s t.

The ancients thought that when the world was made, the first created were the Four Cardinal Points.  Direction established space and within space, time was born. North, South, East and West were imagined as giant angelic forms, deeply silent and steadfast, whose presence gave rise to the human realm.

In the adjoining east gallery artist-in-residence Deborah Harris has placed work to represent the angelic nature of these directional forms, considering how the quality of steadfast is found in life;  a tree deeply rooted in its treeness, an animal who always expresses its true nature and the person who holds a place, reliably performing a task.

We cannot imagine a world without orientation and the succession of time.  But can we dimly perceive the timeless beings who preserve us from the unlimited and give us place?

Gallery Arcturus is on the north side of Gerrard Street just one and a half blocks east of Yonge. The College and Dundas subway stations are short walks from the gallery and both the 506 Carlton and 505 Dundas streetcars stop at Church, just blocks from Gerrard. Street parking available nearby. 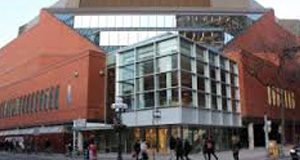