British humour wins out in fart-filled Toronto novel for kids

Posted by: Bulletin Editor November 7, 2014 Comments Off on British humour wins out in fart-filled Toronto novel for kids

This detective tale by a Queens Quay resident features a 10-year-old “Sherlock,” aptly named Shamrock Holmes, who, along with his stodgily snoopy British bulldog Farticus, sets out to solve crime in Toronto’s Downtown. 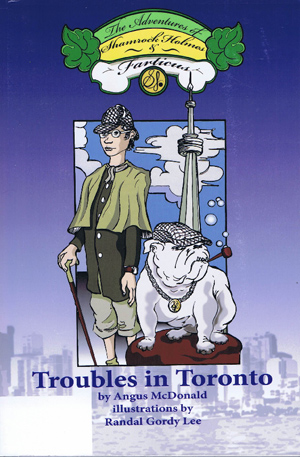 The author of this decidedly kid novel is Angus McDonald who happens to own a bulldog of the same name and, says Angus, is deserving of that name in full atmospheric splendour.

Farticus does seem to have the air of another famous detective and one whom Shamrock would seem to emulate.

The bubbles that come from the pipe in Farticus’ stern jaw on the book’s cover give rise to the question of: what gases comprise the space surrounded by soap film?

Could it be? Would that be too crude?

Can there be such a thing as “too crude?”

It might help to realize that the author does own an English bulldog of the same name and, we are led to presume, the same air-splitting propensity.

The author does, too, own a 10-year-old boy in the sense that one can own a boy any more than one can really own a bulldog. You rent them, as pub-dwellers might explain when referring to the brief period in which a pint remains contained in the belly and bladder of the one who just paid for it.

Kids are like that, too. But Shamrock in this tale is on the chase and the Troubles in Toronto, which is the title of this 145-page quality paperback, are spread out before us and the detective pair as the story unfolds.

Not only does Shamrock conspire with the legendarily gaseous Farticus to crack various mysteries, but the bulldog must face down some threatening canine villains in various forms, some of which might be vegetables.

It’s yet to be seen whether Farticus might lift a leg or split the atmosphere with a rectal expression to disarm or disable an opponent. That could be a potent weapon when used tastefully. It could be something to look forward to in future novels, much as we look forward to Clark Kent changing clothes into his Superman outfit in a phone booth.

Remember that? If you do you’re way too old for this book.

This is to be one in a number of Shamrock and Farticus novels that Angus intends to produce and which, he hopes, will live in children’s literature as a Bobsey Twins replacement (for those of us who remember the Detroit family of the ‘40s and ‘50s).

Perhaps Shamrock can become a version of Nancy Drew, girl detective, in the literature of children.

In this novel the canine hero is a bitch. Yes, Farticus is a female. But she’s a far thing from a lady. And she doesn’t give a—uh—fart whether you think she has airs.

Airs follow her around as the author makes perfectly clear.

As one older and certainly no wiser than Shamrock opined in a different theme but similar sense: When you get past the smell, you’ve got it licked.

As my dear, long-departed mother would have told me were there a Farticus novel to be found in those days:

“You’re not permitted to read that kind of thing!”

Mother was a prude. Sort of.

The Brits don’t seem to have a prudish bone when it comes to breaking wind. Mother would have been appalled. She was from a West Virginia coal-mining town and they had stringent literary restrictions.

But as a kid, I would have read it anyhow.

Under the covers using a flashlight.

2014-11-07
Bulletin Editor
Previous: Renowned musicians to play in Metropolitan United Church
Next: Many Tank thanks to you all for asking about me