Posted by: Bulletin Editor November 7, 2014 Comments Off on Renowned musicians to play in Metropolitan United Church 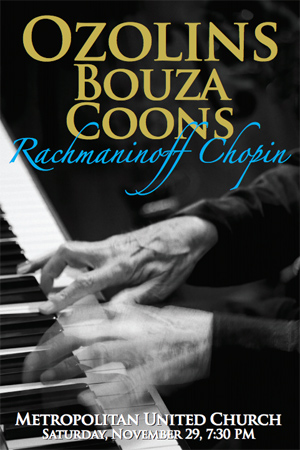 On November 29, 2014, Music at Metropolitan will begin its winter concert series with ‘An Evening of Rachmaninoff, Chopin, Canteloube and Others’. This Saturday evening performance will be held in the historic Metropolitan United Church in downtown Toronto, and will feature the world-famous pianist Arthur Ozolins along with Matthew Coons and Lesley Bouza, soprano, accompanied by pianist James Bourne.
“This is a unique opportunity to appreciate world class performances in a venue rich with musical tradition,” explains Dr. Patricia Wright, Minister of Music and lead organist at Metropolitan United Church. “I encourage music lovers of all ages to experience Met United at this unique and non-religious concert.”
Admission to the concert is $20 ($10 for those under 18 years old). Concert starts at 7:30 pm.
To purchase tickets, please visit www.metunited.org, or call 416-363-0332 ext.26.

Arthur Ozolins is a Latvian-Canadian pianist who has seen worldwide success for his ‘articulate virtuosity, a seamless legato, ravishing tone at all dynamic levels, deep poetry and startling musical directness’. Ozolins has performed over 50 times with the Toronto Symphony and has been a featured soloist with many other major North American and international orchestras.
Lesley Bouza is a soprano soloist with remarkable technical ability. Her significant academic accomplishments in instrumental and vocal music performance have propelled her artistic recognition to the international stage, where she has received several awards including the prestigious Riva del Garda Festival Prize, and the Classical Music Consort’s Handel Competition, among others.
Matthew Coons holds a Bachelor of Music degree from the University of Toronto in organ performance. He won first prize in the Toronto Centre, Royal Canadian College of Organists’ competition and was a prize winner in several other organ competitions. He is currently organist at Runnymede United Church in Toronto and is a former Assistant Organist at Metropolitan United Church.
James Bourne has been the pianist for the Toronto Mendelssohn Choir since 2004. James has had a broad musical education beginning with early studies at the Conservatoire Royal de Musique de Liège (Belgium). He holds a graduate degree in Collaborative Piano from the University of Western Ontario, where he received the Alumni Gold Medal. Postgraduate studies were with John Barstow at the Royal College of Music (UK) presenting recitals with members of the Belcea Quartet and violinist Padraic Savage.

About Music at Metropolitan:

With well over 100 weekly participants, Met United’s music program is well established and celebrated. The church holds the largest pipe organ in Canada (now with 8,300 pipes) and a 54-bell carillon. Music at Metropolitan organizes several concerts throughout the year, including the notorious ‘Phantoms of the Organ’ show which transforms the gothic church into a spooky setting on Halloween night, complete with costumes, decorations and creepy organ music.
2014-11-07
Bulletin Editor
Previous: Student homes plans questioned
Next: British humour wins out in fart-filled Toronto novel for kids