Posted by: Bulletin Editor August 2, 2016 Comments Off on Blake Ward sculpture at the Canadian Sculpture Centre

Proceeds to the Canadian Landmine Foundation 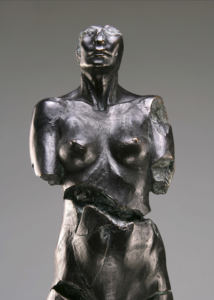 focused on a devastating legacy of our generation, the civilian casualties of landmines. We have contaminated vast tracts of our world with unexploded remnants of war. Even though wars in afflicted countries may have ended, countless people around the world still live with the daily threat of these invisible enemies.

The Fragments series was created to raise public awareness in order to help fund recognized charitable organizations that address the problems posed by these explosive remnants of war.  Since the beginning of the international Fragments sculpture tour in London’s Canterbury Cathedral in 2007 to Delhi, India in 2012, the sculptures have become symbols of hope for activists working to remove landmines. These exhibitions have raised more than 250,000 USD for landmine education, removal and support in Vietnam and Kosovo, and for mine risk education in Afghanistan.  Contributions from Canadian sales will be directed to the Canadian Landmine Foundation.

Subverting the tradition of figurative sculpture by creating a contemporary interpretation embodying both beauty and destruction, Fragments offers a haunting visual paradox, the fragile character of beauty. The sculptures are named after landmines and their bronze faces are as anonymous as the civilian casualties of war.

While breaking away from the classical rules of figurative sculpture, 60-year-old Ward remains true to its representational qualities, yet crosses over into the abstract. Ward’s figures reflect the hidden perspectives of the human condition. Holding fast to his love of the human figure, Ward invites us towards self-discovery introducing new ways to comment on the trinity of human complexity: mind, body, and spirit.

Blake Ward received his Fine Arts Degree from the University of Alberta in 1979 and went on to study classical figurative sculpture in Paris until 1989, when he moved to his current studio in Monte Carlo. When he was invited to teach at the University of Hanoi in 2003, Ward witnessed the incredible number of people who had been affected by landmines. His work evolved into a bold socio-political voice calling out to humanitarian dreams of justice, truth, and equality. He has since been a positive force raising funds and awareness for the eradication of landmines.

Previous: US operations in Syria target civilians
Next: Lawsuit against Bush, others for illegal Iraq war