In the release of its investigation report (A14O0218) Jan. 10, the Transportation Safety Board of Canada (TSB) determined that flight crew deviation from standard landing procedures led to the October 2014 risk of a runway excursion, and that the aircraft was not stabilized during a portion of the approach phase.

On 3 October 2014, the Bombardier DHC-8-400, operating as Sky Regional Airlines flight 7519, departed Montréal/Pierre Elliott Trudeau International Airport, Quebec, for a regularly scheduled flight to Billy Bishop Toronto City Airport, Ontario. During the landing, the aircraft touched down approximately 800 feet from the threshold of runway 26 but did not slow down in a timely manner. As the aircraft approached the end of the runway, the flight crew steered the aircraft toward the last taxiway to prevent an overrun. The aircraft came to a stop on the taxiway, shortly after exiting the runway. There were no injuries and no damage to the aircraft.

During the landing roll, likely in an attempt to make a smooth landing, the flight crew did not adhere to standard landing technique, and only light braking was initially applied, leading to the risk of overrun. It was also determined that during a portion of the approach phase, the aircraft did not meet stabilized approach criteria as a result of being well above the desired approach path. The investigation also highlights deficiencies in training for flight crews in recognizing unstable approaches, as well as the lack of mandatory company reporting of unstable approaches, as risk factors.

The TSB is an independent agency that investigates marine, pipeline, railway and aviation transportation occurrences. Its sole aim is the advancement of transportation safety. It is not the function of the Board to assign fault or determine civil or criminal liability. 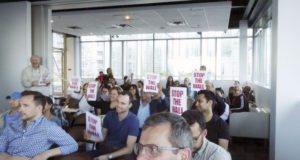