Do angels have wings?

Posted by: Bulletin Editor February 2, 2017 Comments Off on Do angels have wings?

“So they can watch over us and to be our garden angels,” says Lauren, age 9.angel wings

If I planted a garden, I would need angelic protection. I could be dangerous with a hoe. I’m glad “guardian” angels are always on duty.angel wings

There’s a practical personal reason for angelic wings, says Vicki, 10: “So they can use them as blankets when they are cold.”angel wings

It’s not temperature; it’s gravity, says Britni, 10: “God put wings on angels so they can stay in heaven and not fall on the ground.” Angels must stay airborne, adds Lauren, 11, “so they can fly on top of you and watch over you without having to sit on you.”

I’m glad I don’t have to worry about where an angel might decide to sit.

Actually, it’s not temperature or gravity. Speed is why angels need wings, “so they can be guardians for us even when we are in cars and on roller coasters!” says Hillary, 11.

Everyone’s wrong, says Adrienne, 8: “I don’t think angels have wings. I think people just made wings on model angels just for a decoration.”

Andrienne says that angels don’t have wings. She must be wrong because most gift shops have little angel images for sale, and they always have wings. Everyone has seen Christmas plays where the winged angel announces to the shepherds in the field that Jesus is born.

Even though our tradition says that angels have wings, we must look in the Bible to see if it is correct. A simple Bible search of the words “wings” and “angels” reveals that the two do not appear in the same verse. 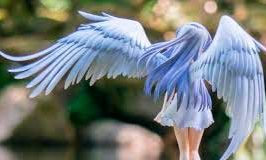 In the Old Testament, angels are often mistaken for men as in our passage of the two angels who led Lot and his family to safety. In verse one of our story, it says two “angels” came to Sodom. But in verse 12 it says the two “men” spoke to Lot. If all angels have wings, why were the two angels called men? It’s because they looked like men.

God gave us the Bible so that we could know truth. Often, religious tradition differs from what the Bible teaches. Andrienne’s idea that someone put wings on a model is probably not far from the truth.

Other winged creatures called cherubim guarded the tree of life in the Garden of Eden after Adam and Eve sinned (Genesis 3:24). Cherubim are very important. The Bible tells us that the Lord dwells between the cherubim in heaven (Psalm 99:1 & Isaiah 37:16). And they have two wings (I Kings 8:7). The next time you see a figure with two wings in a gift shop, you can announce to all the customers that it is really a cherub! Before making the announcement, you might want to ask your mom if it is a good idea.

Some angels in the Bible came to bring people good news. Others warned them that something was going to happen. Angels came to Lot to warn him and his family to leave the city of Sodom because God was going to destroy it.

Think About This: The Bible contains many warnings that can save us from harm.

Ask These Questions: Are you willing to obey Bible warnings? Why does God give us warnings?