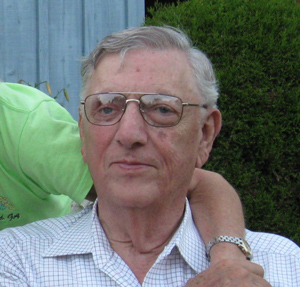 in his 80th year, in the company of his son-in-law. Following a private remembrance with friends from their early days in Canada, his wife Norma disclosed to us that Alan succumbed in a hospice to the cancer which had put him in a wheelchair from which he continued his community work as long as he could.

The Seymours met in Britain at a Valentine’s Day dance during World War II. He was unable to serve in the military because when he was 16 Alan lost the sight of one eye due to an explosion from plasticene he was scraping from a shell. Norma says the windows were blown out in his house and the one across the street.

He told Norma he was an inseminator and herdsman

“Alan loved women and women loved Alan,” Norma says. At the Valentine’s dance where they met, Alan asked Norma if he could walk her home and she agreed. “On our first date, on the top of a (double-decker) bus, he told me he was a artificial inseminator and a herdsman. I thought that was so funny. He really liked women and women really liked him. You can put that in quotes,” she said.

They fell in love, got married 18 months later and soon emigrated to Canada on what she describes as “a hellish cruise” that kept Norma seasick much of the whole 3-week Atlantic crossing.

“We met  a couple from Ottawa on the boat and have known them ever since,”

They were among a bunch of friends from their earliest time in Canada who came the the private wake for Alan held at their holiday home in Belfountain, Ont. “We have known those people for 60 years. We love our Downtown friends, but we’ve only known them for 30 years.” 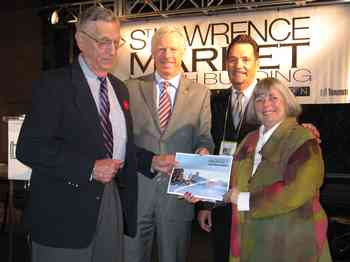 Alan was a community builder and tireless volunteer in Downtown and especially St. Lawrence Neighbourhood.

He was active in many community groups, frequently serving on the board, and always as a volunteer.

He met with his community friends in a luncheon served by another long-time community supporter, HotHouse Café owner Andrew Laffey in September. It was Alan’s farewell to many of those with whom he had co-operated in various civic pursuits.

He was in good spirits, as always. Optimistic and chatty in an event that fixes him in our memories in a wonderful way.

It was his farewell to the community in which he and Norma were active participants.

They were a private couple in some senses.

Alan never disclosed his age. Norma never disclosed her age. Perhaps that’s a carryover from an earlier generation where such information wasn’t discussed. Friends guessed, based on some hints over the years, that Alan was about 82 years old. They were off by about 24 months, Norma says. Both were the same age.

A wonderful community advocate and activist in the most productive sense has left us. Condolences to his beloved wife and their children and grandchildren—and to the community he loved and served so selflessly.