Your carbon footprint? There’s an app for that

Posted by: Bulletin Editor March 4, 2016 Comments Off on Your carbon footprint? There’s an app for that

Toronto-Centre MPP Glen Murray wants his constituents to lead the way in the fight against climate change so others can follow their example.
Murray has set up an online carbon emissions calculator so that households can see how much they contribute to climate change and learn ways to stop it at the grassroots level. 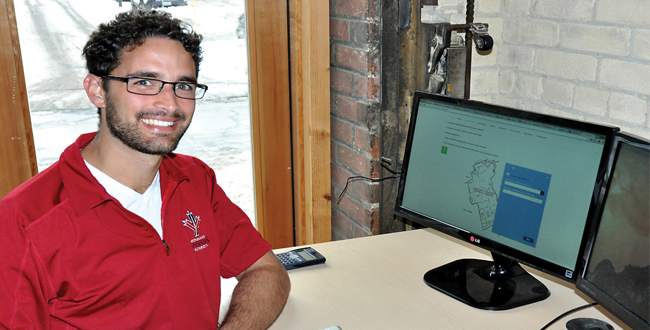 The calculator can be found at torontocentreplan.org.

He spoke to a crowd of about 50 at the Mattamy Athletic Centre on College St. for the launch of TorGEN. The name stands for Toronto Green Empowered Neighbourhoods. Its purpose is to bring community members together to track their carbon footprint and “foster a sustainable plan for Toronto-Centre.”

Murray suggested neighbourhoods hold block parties as a way to discuss getting the TorGEN project started at the local level.

Ryan Meyers, chief commercial officer for Impact Infrastructure on Spadina Ave., co-designed the carbon calculator and showed the gathering how it works. It has questions for visitors to answer to learn how much of a carbon footprint they’re creating, where in their daily living it’s coming from and what they can do to lessen it.

According to Meyers it’s crucial for everyone to act to reduce carbon output considering Canada committed itself to reducing carbon emissions by 20% by the year 2020. The global target, he said, is to cut emissions by 10% for the same year.

“That still … brings us to about a 3.5 to 3.9 degrees Celsius increase in global temperatures this century,” said Meyers.

Questions on the calculator ask how many occupants live in a household, how much vegetation surrounds the property, how much energy is used, how much waste does the household produce, how often do occupants take planes or drive a car.

Once people understand how they’re contributing to carbon dioxide in the air they can then visit a provincial website that shows what technologies and government assistance programs are available to help reduce that output, Murray explained.

He said TorGEN representatives will revisit Toronto-Centre’s eleven neighbourhoods to discuss how their carbon reduction plans are developing.

“Our goal, ultimately, is to be the first net-zero urban community in Canada,” Murray said. He said it’s important for people to reduce their carbon output to at least 80% below their 1990 level by 2050. “Each person on the planet should be able to live within (producing) two tons of carbon a year.”

Murray said he filled out the carbon calculator and conceded his annual carbon output is 2.88 tons. “I’ve got to cut by a little less than one third.” He blamed his home heating-cooling system and the air travel he does for work for putting him over the limit.

“The average Ontarian is at about 11 or 12 (tons) and the average Albertan is 65 tons,” said Murray.

Craig Applegath with Dialog said humans must shift from being a parasitic species to a symbiotic one. “Symbiosis is about two species living in a mutual, supportive relationship. A parasitic species … harms its host or kills its host. That’s what we’re doing now. The world is our host and we’re sort of killing it.”