Culinary arts students at George Brown College’s St. James campus are partnering with the Helderleigh Foundation that’s putting up $400,000 to get people in the GTA to eat healthier. 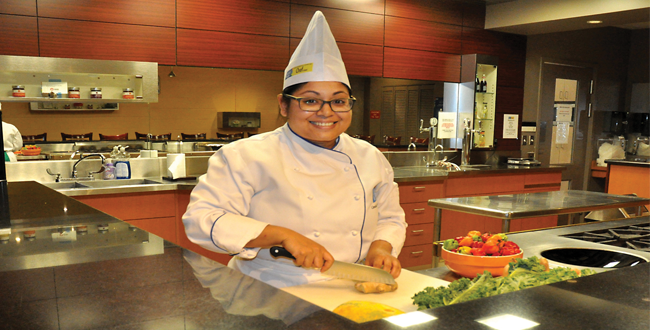 The project starts this spring, awarding grants of $10,000 to $20,000 annually over the next four years to clients—such as community groups, schools, municipalities, health agencies and hospitals—to work with George Brown students to devise nutritious, yet tasty, meals.

The students will solve “practical problems through applied research,” says a college media release, meaning they’ll come up with innovative recipes for people with chronic conditions who require specific foods—but in a tasty way that still makes eating fun. Sufferers could include people with cancers, Parkinsons disease or diabetes.

In an interview, Candace Rambert, GBC Culinary Technician with the college’s Food Innovation and Research Studio (FIRS), gave an example of a diet specific for someone with Parkinsons.

“We took into consideration the motor skills they may have. We developed recipes that were sturdy enough—they suffer from tremours—that they can pick up and get to their mouth a little bit easier. Some of them are at the point where they’re using special utensils, so we took all that into consideration.”

One of the tastier Parkinsons recipes GBC worked on required it be gluten-free.

“We used interesting ingredients substitutions where we used tapioca starch instead of regular flour. Tapioca starch gives it a little bit of a spongier texture so it was sturdy enough … It’s not breaking apart, it’s not crumbling so you can actually eat it,” Rambert said.

“With that population … we’re trying to stay away from high sodium foods so we made sure we added ingredients that were bumping up the flavour, but without adding salt, adding fat and adding sugar,” said Rambert.

Nobody wants to eat bland meals, especially when other family members dive into sumptuous one. “We always strive with our projects so the recipes can be made once and the whole family can eat from it,” said Rambert, a Harbourfront resident.

The agreement clients make with the Helderleigh, to receive a grant, stipulates they must share publicly what they learn from GBC about nutritious eating.

Research Infosource, a leading source of research and development intelligence in Canada, has recognized George Brown as the top research college in the country, notes the college’s release.

2016-03-04
Bulletin Editor
Previous: Your carbon footprint? There’s an app for that
Next: No fun, no ice cream on Sundays in city’s Methodist past