Posted by: Bulletin Editor March 3, 2014 Comments Off on Wonder-kid Cameron Twynham gears up for EuroFormula Open

The 18-year-old from Market Harborough made an excellent start to his weekend during early testing, overcoming small technical problems to record the day’s fastest lap during the second session. That dominance continued in the wet third session when the Team West-Tec driver set a blistering time that only two of his rivals managed to get within a second of Saturday’s qualifying session therefore promised much, before a problem with his car’s Electronic Control Unit – which significantly impacted on straight-line speed – hampered preparations during the morning’s final practice.

Unbowed, Twynham pulled out all the stops in qualifying to set a lap good enough for fourth on the grid and only 0.310sec shy of pole position. Having registered his personal best through sector one and the session’s quickest through the second, only a small error towards the end of the lap cost him a place on the front row. But by going a second quicker than he’d managed in testing, the MSA Academy ace was still understandably pleased with the effort.

“My pace on Friday was brilliant, and to top the timesheets for the first time was a great feeling,” enthused Twynham. “With the upgraded engines in 2014, we will all experience a few problems here and there and it seems I had my fair share this weekend. But my engineer Jonathan Kennard and coach Ollie Millroy did an incredible job of pinpointing the problem on Saturday morning and getting me ready for qualifying.

“The session was easily the best of my career, and I was very close to cracking the top-two, although I’ve still not put a full lap together with a car that is fully operational, so there’s still plenty more to find.” 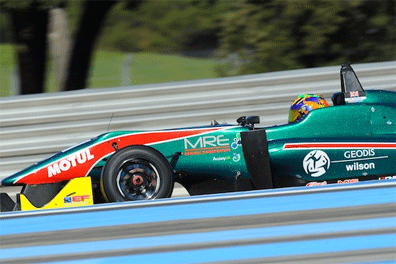 BRDC Rising Star Cameron Twynham continued his preparations for this year’s EuroFormula Open campaign with an encouraging display in the opening Winter Series round at Paul Ricard March 1.

Come the afternoon’s race, Twynham initially made a superb start only to lose momentum avoiding a sluggish Alex Palou, which relegated him to fifth by the end of lap one. Despite this, the leading Team West-Tec driver managed to hold off the Spaniard thanks to some great defensive driving over the 14-lap contest, providing plenty of positives ahead of the final Winter Series round and upcoming EuroFormula Open season.

“I’m incredibly happy with how the weekend went, although the race proved to be a defensive exercise to maintain fifth as I didn’t have the right set-up, but I enjoyed the battle nonetheless,” explained Twynham. “I exceeded my targets for this weekend, which gives me enormous confidence going into the second round of the Winter Series at Barcelona.

“I have to thank all my family and sponsors for their incredible support this weekend, in addition to all my fans on social media who also showed incredible faith in me once again.”

The final round of the Winter Series takes place at Barcelona on March 14/15, giving Twynham another opportunity to prepare for the first EuroFormula Open event at the Nurburgring on May 2-4.

Still only 18, Cameron Twynham from Market Harborough on the Leicestershire/Northamptonshire border is one of the brightest youngsters in British motorsport. After finishing an encouraging second in the European F3 Open Copa Class last season, 2014 sees the MSA Academy member and BRDC Rising Star graduate to the top tier of the championship, now known as the EuroFormula Open. Cameron will continue to drive for revered British squad Team West-Tec.

2014 will also see Cameron play an active role with Anxiety UK, a charity that promotes the relief and rehabilitation of those suffering with anxiety disorders through information and provision of self-help services. It also strives to advance awareness of the general public in the causes and conditions of anxiety disorders and associated phobias. After being diagnosed as a sufferer in 2010, it’s a cause that’s understandably close to Cameron’s heart.