What does it mean when Jesus offers a woman ‘Living Water’

Posted by: Bulletin Editor July 17, 2015 Comments Off on What does it mean when Jesus offers a woman ‘Living Water’

“We can learn that the gift of salvation is open to everyone in the universe,” says Elizabeth, 12. “Even though the woman was a Samaritan, Jesus said that if she had asked, he would have given her the Holy Spirit, otherwise known as living water.

“We can also learn that if we delight ourselves in God and his ways, we shall never be discontent or ‘thirsty.’ Jesus will give us everything we need physically, spiritually and mentally.”

What can I say that would add to Elizabeth’s insight? I wish I had known at age 12 that the only way to find true satisfaction is in a relationship with Jesus Christ. For too long I was seeking to get my thirst quenched from things and activities that only left me disillusioned and restless. 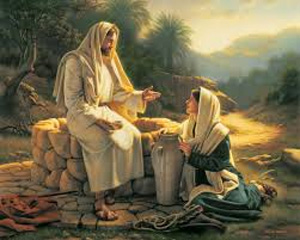 “Wouldn’t it be great if we could drink water and never get thirsty again?” says Jesse, 11. “Well we can, but in a different way! Jesus will fill us with salvation if we ask him to.”

Too many Christians think of salvation only in terms of being delivered from the penalty of sin. There’s no question that having the assurance of spending eternity with Jesus in his kingdom is surely something that should generate a lifetime of excitement. However, Jesus wants to deliver Christians from the present power of sin as well. He wants all his people to experience the abundant life that he promised.

When you’re constantly drinking from the water of life, you stay refreshed. You’re free from what people think about you because you’re doing your work as unto the Lord. When God is in control of your life, even the seemingly mundane can become an adventure. The Good Shepherd will lead you down paths of righteousness, which will usually be the road less traveled.

Gender and racial prejudice keep people separated and agitated. The Samaritan woman to whom Jesus offered living water was living with a man out of wedlock and had been married five times. This woman was a social outcast even among her own people. That’s probably why she came to draw water from the well during the hottest part of the day.

In the Samaritan woman, Jesus saw a woman who needed life. He didn’t see her through the prejudice of Jewish culture. We need to put off the prejudice of whatever culture we bring to the table and see those who differ from us as beloved of God.

I once interviewed a man who had so much racial hatred that he bombed Jewish synagogues as a member of the Ku Klux Klan. In jail, he started reading the New Testament. The light came on. He trusted the Lord Jesus as his Saviour and experienced the relief of knowing his sins were forgiven. He became the co-pastor of an interracial church.

Think about this: Jesus is the water of life who can quench the thirst for reality in your soul.

Memorize this truth: “He who believes in me, as the Scripture has said, out of his heart will flow rivers of living water” (John 7:38).

Ask this question: Do you know any social outcasts who need the water of life?

Why is courage important?

How should we pray for North America?