Residents opposed to jets on the waterfront cried foul when they saw a preliminary plan to expand the Island airport, at a public meeting at Exhibition Place March 31.

Unveiled by engineering consultants WSP Canada, the proposal includes two 200-metre runway extensions and barriers at each end to prevent jet blasts from knocking over sailboats. The plan would also raise daily takeoff and landing slots from 202 to 242, possibly boosting annual traffic from the current 2.4 million to 5.5 million passengers.

But it was all too much for local residents and others who came from far away.

“How big is this getting, and where is it going to stop? What is our Waterfront going to be?” asked Norman Di Pasquale, chair of NoJetsTO. “It’s just a question of scale. It doesn’t fit.”

James Lindsey of WSP suggested that the increase meets demands in a rapidly developing Downtown.

“The Downtown area is the fastest growing in the GTA,” he said. “So the Downtown core is where there is the most demand, and … where the passengers are actually coming to and from.” 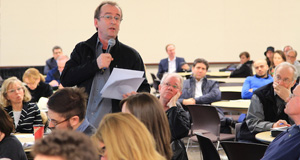 Resident Jim Panou questions the accuracy of some details in the proposed jet expansion of the Island airport.

James Lindsey, aviation expert, explains draft proposal for a jetport on the waterfront.

The proposal also favours widening the marine exclusion zone at each end of the runway by up to 25 metres. A new road tunnelling under the runway would lead to the airport’s south side, where the smaller, private aircraft would be moved. That would keep traffic, including fuel tankers, from crossing the runway.Sound barriers may also be proposed in a pending environmental assessment by AECOM, a company hired by newly renamed Ports Toronto, formerly the Toronto Port Authority (TPA).

Yet the proposal runs counter to the imposed city council cap of 202 slots for daily flights, and violates the tripartite agreement’s restriction against jets and expansion of runways. A representative for MP Adam Vaughan attended the meeting, handing out pamphlets saying Liberals would not re-open the tripartite agreement, but keep the airport at its current operations.

If jets do fly there, said Lindsey, they would include Bombardier CS100 “whisper jets” as well as eight other jets, including Cessnas and Learjets, that fit the tripartite agreement’s noise profile.

“You seem to be making a lot of assumptions and stating them as fact,” said Brian Iler, chair of the anti-Island airport group Community AIR. “When you talk about ‘when the runway expands,’ you don’t instill confidence that you’re approaching this from an unbiased perspective.”

But Lindsey said a preliminary runway design must be presented to Transport Canada and Nav Canada to undergo a regulatory process. He also explained his rationale for seeking to expand airport traffic despite a stagnation in passenger numbers between 2011 and 2013.

“Just like in any product lifecycle, there’s a steep increase when a new product is produced, and then finally when that market matures, that levels off,” he said. “So if there’s a new route that’s introduced, then you would see a bump in activity.”

Indeed, the proposal shows a direct-flight range as far as San Francisco, Newfoundland and Panama City.

Other resident concerns ranged from pollution of air and water to excessive noise and the massive infrastructure that would be needed on the city side. Questions were also asked about the lack of lighting to guide jets across the bay to the runway, which isn’t required but is common in similar airports, according to resident Jim Panou.

Others raised the nightmare scenarios of explosions of the surface fuel tanks or a jet accident in the densely populated Waterfront.

“How do you plan to handle … the jet fuel equivalent of 2,500 tons of TNT that’s in your jet fuel depot that’s on the island right now?” asked resident Daphne Lavers. “I get to live with the threat of becoming Lac-Mégantic on the waterfront or becoming another Sunrise Propane with one single airplane accident.”

Gene Cabral, executive vice-president of the airport and Ports Toronto, said the airport meets “all regulatory requirements from a safety” point of view.

Whatever happens, it may not be soon: Lindsey said that at this pace, he doesn’t see jets at the airport before 2019. Some question whether it will ever happen.

2015-04-09
Bulletin Editor
Previous: April 22: You may speak out on the future of Toronto’s waterfront
Next: Condos top soaring home starts in March over February