Planning a trip to the United States? If you had to make a list of the top 10 U.S. cities to visit, what would they be?

Whether you are an American or a visitor from abroad, the first city that pops into your head is probably New York, maybe followed by Los Angeles and San Francisco. All three are right up there in most top 10 lists, and you should visit them, but there are others.

There are plenty of cities, large and small that are great to visit, but what are my choices to include with them in the list of top 10 U.S. cities?

Boston, Massachusetts, for starters. This city is steeped in U.S. history. Walk the Freedom Trail to see historic buildings like the  Old North Church. It was from the Old North Church that  Paul Revere took his “midnight ride” crying the warning of the approach of the British the day before the start of the US Revolutionary War. As the poem goes, “… One if by land and two if by sea, And I on the opposite shore will be, Ready to ride and spread the alarm …” Eat in the Union Oyster House, Boston’s oldest restaurant. Visit the colleges: Harvard, Massachusetts Institute of Technology, and Boston College just to name a few.

Chicago, Illinois, has long been said to have an inferiority complex to New York, but it is a world-class city. There are fantastic museums, good restaurants, and you’ll find cutting-edge architecture. It’s right on Lake Michigan with a beautiful waterfront. Take the time to visit Millennium Park and Old Navy Pier.

Denver, Colorado is situated in the Rocky Mountains. You can visit, ski or snowboard at some of the famous resorts nearby or come to hike in the summer and enjoy the view.

Las Vegas, Nevada is a city with a reputation you’ve probably heard about. Is it a good place for tourists? That depends on what you want. It’s known for its gambling casinos and the world-class. The casinos vie for visitors with over-the-top themes: Roller coasters on the tops of buildings, dancing water fountains, and of course LOTS of bright lights at night along the ” Las Vegas Strip.”

Miami Beach, Florida is a draw summer and winter for sun and beach lovers. Visit trendy South Beach, the oldest section of Miami for its popular restaurants and vibrant nightlife. Take a tour of the Art Deco District; the colours and decorations will amuse you. 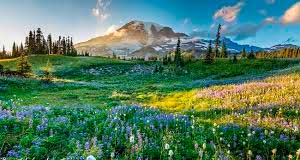 Although Seattle, Washington, has a reputation for being rainy, it actually has many sunny days and is often cloudy rather than rainy. The rain, however, makes for plenty of greenery, perfect for hiking. It’s on Puget Sound, which makes it a great place to sail. Again, take the time to visit Pike Place Market. The Space Needle is a left over from the 1962 World’s Fair, but it has become Seattle’s symbol. There is an observation deck and a Sky City restaurant for great views of the city, the Olympic Range and Cascade Mountains and, on a clear day, Mount Rainier.

Washington DC is only last on our list of top 10 U.S. cities because we put it in alphabetical order. As the nation’s capital city, it offers The White House, the Congress Building, The Smithsonian Museums, and all the memorials along The Mall, such as the Jefferson Memorial, the Lincoln Memorial, and the Washington Monument.

So do plan a visit to New York or Los Angeles or San Francisco, but consider one of these other top 10 U.S. cities for your visit. Even better, start your own list and let us know your favourite destinations.