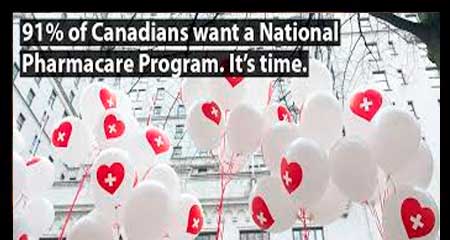 Universal pharmacare’s time has arrived. Most Canadians would agree that those who need potentially life-saving medications should have ready access to them. Yet prescription drug coverage in Canada varies widely depending on where you live, your health status, income and age. It’s time for a universal pharmacare program.

Canadians don’t like to hear this, but when it comes to pharmaceuticals, our health insurance system has plenty in common with the United States. In fact, the U.S. is marginally ahead of us where prescription medication is concerned.

Provinces usually cover medications for the very poor – but so does the U.S. system. Provinces also tend to cover seniors, although not as generously as in the U.S., since many provinces have or are in the process of de-insuring so-called “wealthy” seniors because of budget constraints. Limited provincial drug plans are riffled with deductibles and co-payments, meaning financial barriers still deter many from getting the drugs they need. universal pharmacare

The results are devastating for Canadian health.

For example, Ontario insures bunion removal and in vitro fertilization services, but not insulin for young and middle-aged diabetics. As a result, an estimated 830 diabetic patients die in Ontario every year from want of something as basic as insulin.

Here’s something else we have in common with the U.S.: despite not covering everyone, we still manage to spend more on drugs than most other countries.

Consider England and New Zealand, where everyone is covered for a broad range of prescription drugs, there are minimal co-payments and, for poor or high users, many drugs are completely free. All this and they still spend much less on prescriptions than Canada or the U.S.

So while some critics claim that universal drug insurance is a nice idea but not affordable, it’s very clear that such insurance is actually the key to affordability.

So how can we make universal pharmacare happen?

One strategy is to expand the Canada Health Act to include pharmaceuticals but let the provinces largely run the show. Participating provinces would agree to a fair process using an independent agency to identify essential medicines. The federal government could provide a limited budget of, say, $5 billion for this program, paid as transfers to the provinces over 10 years.

Provinces could also collect premiums as a percentage of income, like a pension plan, to help cover the costs. Or they could stream premiums from private insurance plans into a central purchasing pool.

The list of essential medicines wouldn’t be set in stone. If drug prices are negotiated down, resources are freed up to add more drugs. And each province could negotiate its own prices with drug companies, but ideally most would agree to negotiate together to increase purchasing power.

A more ambitious strategy would be to create a federally administered pharmaceutical plan for essential medicines. This offers a new vision for health care in Canada by maximizing the buying power of a nation under universal pharmacare. Pharmacies could bill the federal government directly when Canadians present prescriptions for essential drugs.

About $5 billion would likely cover a core list of approximately 150 essential medicines, making them free for all. Money could be saved by eliminating tax breaks offered to private insurance plans. Private insurers would still cover drugs not included in the basket of essential medicines or other health services.

There would be no need to change the Canada Health Act. In the spirit of co-operative federalism, this option could be offered to provinces without any legal requirement to participate.

And employers would have the benefit of a significant reduction in the costs of keeping their workforce healthy.

With at least two viable models for universal pharmacare, it’s possible to be fiscally conservative without burdening Canadian patients in need of drugs.

— Colleen M. Flood is director of the Centre for Health Law, Policy and Ethics, University of Ottawa, and an expert advisor with EvidenceNetwork.ca.

Previous: Take no liberties with the gods, nor weary them
Next: We cannot afford the cost of ignoring poverty