Toronto Premiere: A Truth to be Told by Raven Sinclair

Posted by: Bulletin Editor November 5, 2016 Comments Off on Toronto Premiere: A Truth to be Told by Raven Sinclair

From the 1960s and the mid 1980s, First Nation and Metis children in Canada were removed from their families without consent and placed with non-Aboriginal families. This episode is known as “The 60’s Scoop.” The reason you may not have heard of it, is that it doesn’t get much mention in Canadian schoolbooks or archives.

The Studio for Media Activism & Critical Thought at Ryerson University 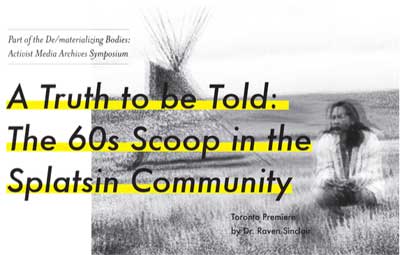 is pleased to host the Toronto premiere of “A Truth To Be Told: The 60’s Scoop in the Splatsin Community” (Canada 2016). The film’s producer, Dr. Raven Sinclair, will speak to the ways in which this film has rematerialized the lived experience of colonialism for Indigenous 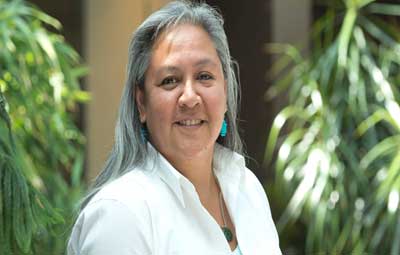 One of Canada’s primary experts on the ‘60s Scoop’ era, and executive producer of  ‘Truth to be Told’, Dr. Raven Sinclair (Ótiskewápíwskew) is Cree/Assinniboine/Saulteaux from Gordon’s First Nation. Dr. Sinclair is Associate Professor of Social Work at the University of Regina and the Assistant Director of the Indigenous Peoples’ Health Research Centre.

As Dr. Sinclair states, “The voices and experiences of this community have been completely dematerialized in any archival records in order to further the biopolitical and colonial aims of the state. This film challenges the colonial rhetoric of child-saving as the goal underpinning child welfare.”

This event is part of a day-long symposium, De/Materializing Bodies: Activist Media Archives. This event is supported by Ryerson’s Office of the Provost & VP Academic, RTA School of Media and the Faculty of Communication & Design.

Previous: How does God talk to you?
Next: I voted in America’s ugliest presidential election