Posted by: Bulletin Editor September 20, 2013 Comments Off on Toronto LGBT salute to International Day of Solidarity

Barry Dennison —
As President Obama met with gay, lesbians, bisexual and transgendered (LGBT) people in Russia after the G20 Summit, on Sept. 8, the world was mobilizing in a grassroots movement with marches here in Toronto, cities in the United States, England, Germany, Sweden, Brazil, the Philippines and many other counties took to the streets to protest Russia’s president outlawing even discussion on accepting homosexuality. 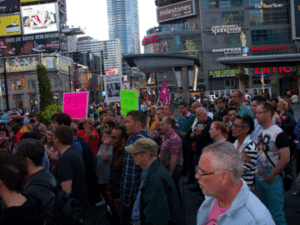 All with a global message of ‘solidarity’ and ‘love’ with gays, lesbians and trans-identified people who live in oppressive countries, as Russia, Uganda, Jamaica, Pakistan, Sri Lanka and other Indian subcontinent countries, as well as the Muslim world where they are hung by the neck.
All around the world, gays have now established a movement that marks “International Day of Solidarity for Global LGBT Equality.”
In Toronto, there was an unprecedented 2.5-hour, 3ppart public demonstration. First, a demonstration at a busy Downtown location, Dundas Square, where an approximate 300 people gathered. Then an estimated 200 people took part in a marathon march to wake up the city on their way to Toronto International Film Festival (TIFF).
“What’s happening in Russia are laws that are oppressive.” said protest organizer, Roy Mitchell, “laws that ban the adoption of Russian children from being adopted by any country who have same sex marriage, to [gag orders] intended to silence any mention of gay equality rights.”
Adding, “Gays in Russia are facing increased violence and public humiliation while government authorities are saying, “Nothing is happening.”
Organizers said the intent of the demonstration was to send a message to Russia and elsewhere to say, “We’re here, and in solidarity with gay people in this world.” Calling citizens to put pressure on the Canadian government to continue to call on Russia to change these oppressive laws.”
Some in the crowd called for boycotting the Olympics, to calling on our allied corporate Pride sponsors to stop doing business with Russia (ie., Coke, McDonalds, Visa).
Organizer Lauryn Kronick and friends then presented letters addressed to the crowd, first from the executive director of Russia’s “Side by Side” Queer Film Festival in St. Peterbough, Russia who wrote, “Our cultural events have played a pivotal role in organizing public events … we have sought to maximize and expand the range of accurate information on LGBT rights within public space … [the Russian government] is a totalitarian regime that denies people access to information, the freedom of association, the freedom of peaceful assembly, expression and free thought.”
His letter said the film festival has been banned 5 times, and now faced with a $21,000 fine for talking about gay equality rights.
Presenters read letters to encourage Toronto on and to share their views, including those from other parts of Canada (Winnipeg, Montreal), Sweden, San Francisco, London, Brazil and France.
Leaving Dundas Square, protestors trekked from the Garden District to the Entertainment District where the Toronto International Film Festival (TIFF) was being held at Bell Lightbox Theatre.
En route, the protestors chanted, “Hey hey, Putin, you can’t hide, we can see your hateful side,” to “You must, you must understand, queer blood is on your hands.”
Throughout the parade route, people responded with enthusiasm by clapping and cheering with those in the rally. From bystanders on the sidewalk or jumping up from restaurant roof patios to “hoot ‘n holler” applauding protestors’ messages as, “Same love Toronto, Same love Russia”
Once at TIFF, out lesbian City Councillor Kristyn Wong-Tam addressed the crowd, saying, “We love TIFF here in Toronto because many films deal with political content … and just like the arts community who will not be silenced, neither will the LGBT world community be silenced.”
Adding, “… your voices have been heard today. Take pride in your political protest. The people of Russia will hear us. It’s important that people not be passive and stand up to oppressive regimes.”
Protestors responded, chanting, “Queer rights under attack, fight back!”
Wong-Tam also pointed out that the Olympics are coming up next year in Russia, as Toronto hosts World Pride, saying, “With the media’s spotlight on both our countries … human rights are being eroded and if we don’t stand up in peaceful marches, it will be the same as condoning these suppression of rights on the basis of sexual orientation.”
The rally concluded with a song performed by Toronto’s gay singing group, Choir Choir Choir, with a re-imagined version of Sting’s 1986 song, “Russians.”
Listen to this powerful protest song with a message directed at President Putin, including, “We can’t sit quietly and ignore your political threats … we don’t believe your lies!” A song that also calls for peace and understanding.