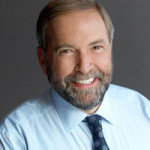 Tens of thousands gathered across Canada and hundreds participated at Toronto City Hall Mar. 14 as they joined in a nationwide protest against the Harper Government® Bill C51, a police-state surveillance bill that has the approval of Liberal leader Justin Trudeau and is strongly opposed by Opposition Leader Tom Mulcair.

Mulcair was in Toronto Mar.15 at a planned gathering of Toronto NDP faithful and said this about his attendance at the Bill C51 protest: “Proud to join Canadians [Mar. 14] taking a stand against Harper’s attack on our rights & freedoms.”