Posted by: Bulletin Editor June 4, 2014 Comments Off on Toronto home sales and prices are soaring

Toronto Real Estate Board President Dianne Usher announced that both the number of home sales through the TorontoMLS system and the average selling price were up strongly in May compared to a year ago. 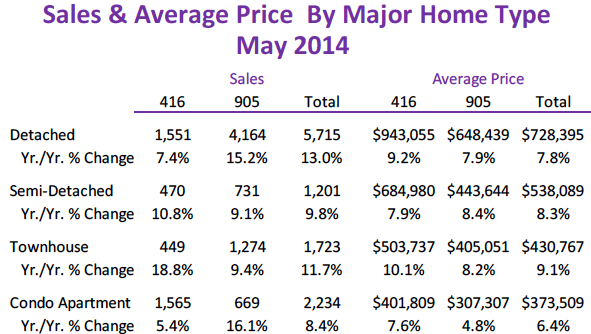 “We are now at the peak of the spring market when we generally see the greatest number of sales and the highest average selling prices. Based on the May statistics, buyers have been more active this spring compared to last year. Despite strong price growth so far in 2014, many households remain comfortable with the monthly mortgage payments associated with the purchase of a home, as borrowing costs have remained at or near record lows over the past few months,” said Ms. Usher.

“The listings situation in the GTA did not improve this past May. With listings down and sales up compared to last year, competition between buyers increased. The result was price growth wellabove the rate of inflation, especially for singles, semis and townhomes,” said Jason Mercer, TREB’s Senior Manager of Market Analysis.

“It is also important to point out that even though the condo apartment market segment remains comparatively well-supplied, as new project completions have generally led to an uptick in listings, we have seen enough buyer interest to prompt strong condo price growth as well,” continued Mercer.