The Brothers Ford should be toast at city hall

Posted by: Bulletin Editor June 5, 2014 Comments Off on The Brothers Ford should be toast at city hall

Enough of the crooked Ford boys! It’s overdue that the outrageous pair be removed from city hall and an array of  ethical breaches on behalf of their family corporation, Deco Labels, should drive a stake through their benighted careers in public office. 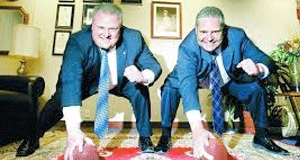 for not stepping in to punish ethical breeches such as those committed by the Fords since she now heads a government whose previous leader, Dalton McGuinty, resigned in disgrace over an array of unethical decisions while in power.

She should have dumped Ford because the province is the boss of its cities and has that power.

Soon after being elected Toronto’s mayor, Rob and brother Doug Ford lobbied city bureaucrats to give city tax breaks to one of their private business’s customers, Apollo Health and Beauty Care. Absolutely unethical.

That same year, 2011,  we now learn thanks to an article in the Globe and Mail that Robbie and Doug held a city hall meeting with a printing company they wanted to get business from for their label company and later that June they presided over a meeting between the printing firm’s executives and top city bureaucrats aimed at getting city business for the U.S.-based printer.

The unstated message was: We’re running things in Toronto and if you give our private company business, we’ll pay you back by giving you Toronto taxpayer business. Now that’s customer service! Not exactly what city voters expected when they took Rob’s campaign promise literally.

Rob abused his position when he commandeered city crews to pretty up the road around his Deco Labels office in time for his company’s 50th Anniversary shindig in 2012.

Why is there talk of his being a credible candidate for re-election and why is his equally compromised brother Doug still in office?