The oldest bank building in Canada

Posted by: Bulletin News August 15, 2014 Comments Off on The oldest bank building in Canada

The Bank of Upper Canada building on the northeast corner of George and Adelaide built between 1825-27 by Dr. W.W. Baldwin with the help of engineer Thomas Hall is the oldest bank building in Canada.

This makes the former bank only one of two buildings (including Toronto’s First Post Office) left standing in the original 1793 boundaries of the Town of York bounded by George, Adelaide (then Duke) Front and Berkeley streets. Iin 1834 the Town of York becomes the City of Toronto.

In 1806 a plot of land on the northeast corner of George and Duke was granted from the Crown for the purpose of erecting York’s first Catholic church. The church was destroyed by fire around 1814 and the empty lot went unused with services held in the homes of various church elders.

By 1822 the Catholic trustees of the lot decided to sell the plot, which also included the original church basement, to Sir William Campbell who in turn sold the land for the construction of the Bank of Upper Canada Building in 1827.

Since the bank’s 1806 foundation complete with V-shape artillery-notch windows were incorporated into the bank building, this makes that basement the oldest structure still in its original place in Toronto and eclipsing the 1808 Toronto Island Lighthouse.

The Bank of Upper Canada was founded by the powerful elite of early York known as the Family Compact, a group of wealthy influential families in a time before democracy reached our shores. The bank started out on property of one of those early Family Compact founders, William Allen (Allen Gardens), on the northeast corner of Frederick and King in 1822. 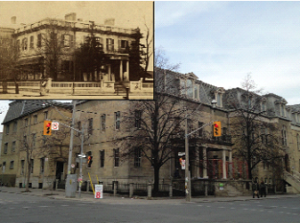 In 1825 it was decided that a grand and imposing structure should be built on the then northern boundary of York on Duke and George so that all who saw it firmly planted there would be intimidated—much like the great banks still do to this day as they reach higher into the sky. When the bank opened it was an impressive site looking like a fine country home surrounded by trees and other fine Georgian-style buildings, giving the Town of York an “inspirational” English look.

Banks of early 19th-century Canada were not a place for the average citizen to deposit their meagre earnings. They were chartered mainly to handle government deposits and to provide mortgages on land grants to the wealthy elite of the province. Eventually this kind of inequality would lead to the Rebellion of 1837 with Lt. Gov. Sir Francis Bond Head and the Family Compact on one side and newspaper-man William Lyon Mackenzie and the people on the other.

Even though the rebellion was quashed after only a few days in December 1837, uniformed guards stayed at the Bank of Upper Canada until January 1839. Time healed the old wounds and in 1861 the Bank of Upper Canada moved its offices to Yonge and Colborne to be closer to the new financial district. By 1866 the once all-powerful bank collapsed due to ill-advised mortgages granted on worthless land deals.

In the 1870s the Christian Brothers bought the old bank building and post office, then hired architect Henry Langley to transforms it into De la Salle College by building a third structure and connecting the three buildings with a huge mansard roof giving the appearance of one large structure.

In 1926, a century since the bank first opened, the building was taken over by the United Farmers of Ontario, a left wing political party and a perfect irony to this former bastion of the Family Compact.

The years rolled by and by the 1960s the building was being used as an egg-grading station, and later as artists’ studios.

On June 30, 1978 a fire broke out that gutted the top floors and for the next few years it sat there as an empty shell boarded up and forgotten even though it was now declared a National Historic Site in 1979.

In 1980 the derelict block was rescued by forward-thinking developers Sheldon and Judy Godfrey who would resurrect the historic site that encompassed two centuries of the political, economic and social history of Toronto.

A meticulous renovation followed, turning the historic building into offices and resurrecting the post office now operated by the Town of York Historical Society.

Today, after another top-to-bottom renovation, the Bank of Upper Canada building is now home to an Internet communications company called Myplanet that provides services to help power and connect with the world around us. It also bills itself as a socially responsible organization that creates a positive workplace for its team members.

The Bank of Upper Canada was once a place for a privileged few but now it belongs to the world; a sentiment I think Mackenzie would approve. Speaking of renovations, last month in writing about the reno of the Dominion Bank building I incorrectly spelled the name of architect Stanford Downey, I apologize.

Join me Sunday Sept 7 in celebrating the 50th anniversary of the arrival of the Beatles at the King Edward Hotel in the same suite where it all happened 50 years to the day.

This special event, including a private tour of the hotel is by reservation only and is limited to 25 people. The cost is $25 cash per person visit www.brucebelltours.ca or  ph. 647-393-8687