Local artist Ryan MacKeen is making a big difference in his community.

McKeen’s company, Plates Animation, is located at 372 Richmond St. W. in the Entertainment District’s Spadina Queen Peter Richmond, or SQPR, corridor. Earlier this year, he was asked to design and execute a mural in the grubby alleyway between Queen and Richmond streets, on the west side of 388 Richmond.

The growing residential base of the neighbourhood has been working for months to clean up the area, which has seen its share of crime, noise, graffiti, and more during the busy summer nightclub season. Last year, the SQPR Community Association was formed to try to improve the area.

Members of the association reviewed McKeen’s designs and began a group cleanup of the space. The planned mural surfaces were primed and prepared for McKeen’s work.

Liz Sauter, president of the association, reports, “The retailers and condo owners all love this 50 foot delight of alley cats. A little girl in the condo named Serina reviewed the drawings and suggested that the artist add flowers so that the alleycats didn’t look so ‘scary.’ The artist adjusted the proof and included a large flower just for her as we all thought her idea was a great one. We call the large flower on one of the garage doors “Serina’s flower” as a tribute to her creativity.”

McKeen donated his time to paint the mural. Sauter covered the cost of the special colour paint needed, and 52 Division donated the base coat to prep for the mural.

Before: SQPR members clean up the alley 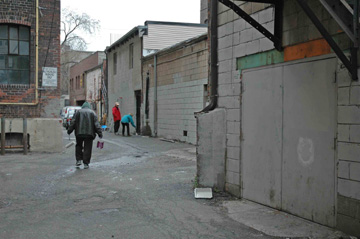 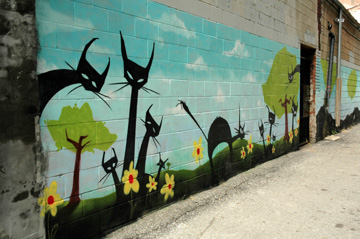 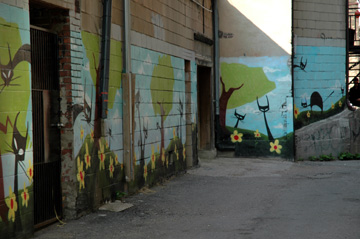 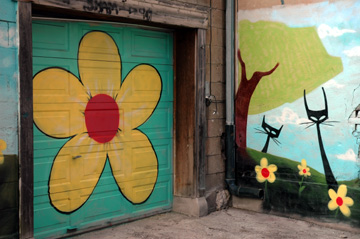