She gives back by ringing her bell: ‘Everyone’s in their happy spirit!’

Posted by: Bulletin Editor December 3, 2014 Comments Off on She gives back by ringing her bell: ‘Everyone’s in their happy spirit!’

Events that happened more than 80 years ago made Garden District resident Kara Kieferle decide she wanted to be a Salvation Army bell-ringer this year.

“When my grandfather was a young man growing up on the prairies in the dirty ‘30s he was homeless and he rode the rails. He always said to us if it wasn’t for the Sally Ann (he) would have starved to death,” said Kieferle. 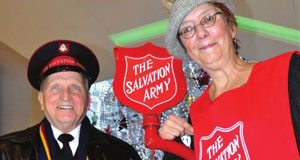 On a November day Kieferle was paying back the Salvation Army for the help it gave her grandfather all those years ago as she stood ringing her bells next to a Salvation Army Christmas kettle in the Eaton Centre.

“He went from town to town and every time the train stopped the Sally Ann was right there with soup and bread. He went from Alberta to Manitoba, Saskatchewan and back and forth looking for work as a 13-year-old, unemployed labourer,” said Kieferle.

“They fed him and made sure he stayed alive. As a result my family and I, still to this day, take my children to the (Salvation Army) kettle with $20 each to put in,” Kieferle said.

Salvation Army Major Ray Braddock said his Toronto Harbour Light Ministries, at Jarvis and Shuter streets, set up its first kettle at the St. Lawrence Market on Nov. 15. Harbour Light has six kettles at the Eaton Centre and the adjacent Canadian Tire store.

“We hope to raise in the kettles that we have about $60,000,” Major Braddock said. It goes to the Salvation Army’s Downtown mission work. “The people’s response to the kettles has been excellent down through the years,” said Braddock.

He said his main challenge is not finding places to put kettles but finding volunteers to man them. “That’s the big challenge we have every year. Once (volunteers) get on it and they find meeting people and meeting children like this—it’s really a fun thing to do,” said Braddock.

Harbour Light needs kettle volunteers right up to Christmas Eve to cover different shifts from 11 a.m. to 8 p.m. “We’re not out on Sundays,” said Braddock.

As for Kieferle, she said the response she gets from passers-by cheers her. “Everyone’s so friendly. Everyone’s in their happy spirit,” she said as shoppers stopped to drop coins and bills into her kettle.

She hands out wallet-sized calendars to adults who make donations, and for kids she has a special treat.

“I’ve got candy canes for the little ones if mom approves or dad approves or grandmother approves. It’s been wonderful,” said Kieferle.

Kieferle told how her grandfather was buoyed by the reception he received from the Salvation Army at train stops.

“He always enjoyed that there was companionship and fellowship. He wasn’t necessarily a religious man, but he appreciated the fact there was hot food and friendly faces, often music. People could sit around a fire, sing hymns or Christmas songs,” said Kieferle.

“He just enjoyed that. He felt like being part of a family even though he didn’t have a family,” Kieferle said.

To volunteer as a Downtown kettle bell-ringer call Toronto Harbour Light Ministries at (416) 363-5496.