Seeing how the rich vacation at 5-Star Florida hotels

Posted by: Bulletin Editor November 6, 2013 Comments Off on Seeing how the rich vacation at 5-Star Florida hotels

For over a hundred years, Palm Beach, Florida has been a playground for the rich and famous. Today, this Atlantic Ocean community remains among the most desirable of vacations destinations, with five star resorts that serve Old Money and Nouveau Riche alike.

The Toronto Bulletin recently lived the high life at Palm Beach’s iconic ‘The Breakers’ resort, and the New York chic-style Omphoy. For good measure, we also went southwards towards Miami, to enjoy the Ritz-Carlton’s South Beach resort. Here’s the skinny on all three of them, each of which offers a different kind of vacation for well-heeled readers looking to escape the cold Canadian winter.

The Crown Jewel: The Breakers

Imagine the early 20th century grandeur of the Royal York Hotel, on an even grander and expansive scale: That’s The Breakers, named for the waves that break on this resort’s beachfront property. Designed by legendary architects Schultze and Weaver as an Italian Renaissance homage to Italy’s 16th century Villa Medici – they also built The Pierre hotel in New York City – The Breakers is a truly five star experience. Imagine vast soaring ceilings, grand halls with gorgeous European decoration, and a refined commitment to true service – supplemented by an astounding kitchen and range of restaurants – that’s The 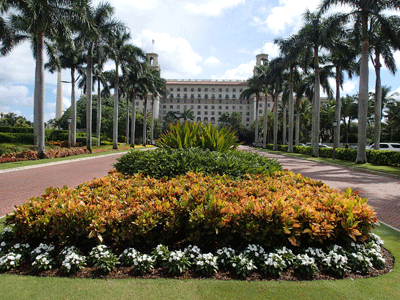 Even the drive up to the property is breath-taking: You find yourself moving down past tall palm trees, arrayed as if they are columns in a temple, and The Breaker’s magnificent towered structure is the altar. On the property itself, there are nine pools, a full service spa, and a broad range of restaurants and bars (nine of each).

Our favourite restaurant was HMF: Named for the initials of hotel founder Henry Morrison Flagler – co-founded of Standard Oil with John D. Rockefeller, and found of Palm beach – the 1950s-styled HMF offered a wonderful array of varied cuisines, plus expertly-made cocktails. As we sat in its vast, lofty space, we couldn’t help but know that there is indeed an epitome to luxurious living – and we had found it. At the same time, The Breakers’ Beach Club restaurant – with its poolside location, tall palms and direct vantage point over the ocean – was another can’t-miss stop.

Amazingly, The Breakers is situated on 140 acres; big enough to accommodate this resort’s two 18-hole golf courses! There are 540 guestrooms here, including 68 suites. This said, The Breakers’ private beaches were relatively narrow compared to other properties we stayed at.

This incarnation of The Breakers is actually the third one to sit on this site. The first two were built of wood, which is why they burned in 1903 and 1925 respectively. Henry Flagler took no chances the third time around: The current hotel is made of stone and concrete.

For no-compromise, true luxury living in the best grand hotel tradition, The Breakers is our Number One choice. Nightly rates run from US$300 to US$1600. Details at www.thebreakers.com.

Opened in 2009, The Omphoy resort is a direct counterpoint to The Breakers. In place of the Breaker’s grand hotel decor, The Omphoy is 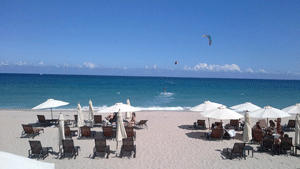 The beach at The Omphoy: The Omphoy’s wonderful, private white sand beach; the stuff that Florida ocean vacations are made of.
Photo by Susan Trott.

s all New York urban chic, with dark walls, floor-to-ceiling windows, stunning custom furniture, and a definite emphasis on pizzazz. It is also a smaller structure; basically a small high-rise with 139 rooms and suites. It is truly a modern boutique hotel in an area known for older-themed properties.

On the plus side, The Omphoy has a truly excellent private beach. Its dark Asia-influenced decor is impressive, and even the balconies on the hotel’s sides have a reasonably good view of the ocean. This is a resort for urbanites who don’t want a standard resort experience. (We noticed a n

umber of New Yorkers at The Omphoy when we were there.) Gastronomically, it offers Malcolm’s (helmed by New York chef Malcolm Wurster), the O-Bar, and the indoor/outdoor Terrace Restaurant.

On the negative side, food quality and staff service at The Omphoy were inconsistent. A club sandwich that was superb when served on the beach, but cold and stale after a hour-long with Room Service. There was also a tendency for many items to be unexpectedly ‘a la carte’, such as valet parking for $25/overnight, never mind tips.

Bottom line: If urban chic is your style, you will be more comfortable at The Omphoy than The Breakers. But those who like the grand hotel experience, including the service and culinary quality that attends it – should stay at The Break

The name Ritz-Carlton is synonymous with luxury. The Ritz-Carlton, South Beach is heir to this tradition. It has impeccably-decorated 375 rooms and suites, a large guest pool, and undeniably access to the best beach property of all three resorts in this article. The difference is that this hotel’s beach is actually public, with gated access to the hotel. Still, the fact that the beach is big, offers food service and chairs/cabanas/umbrellas from the Ritz-Carlton, is just steps away from the hotel proper, means that it feels as private and uncluttered as The Omphoy’s private beach. 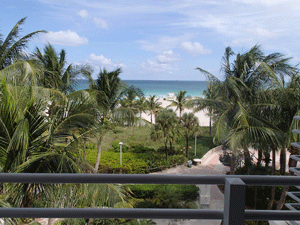 The Ritz-Carlton, South Beach was originally built in 1953, and designed by architect Morris Lapidus. Featuring a central core with two low-rise wings that encircle the pool and deck, it has since been modernized and completely restored. The overall vibe is modern, classy, and 1%.

The Ritz-Carlton chain is serious about service and it shows, especially at the DiLido Beach Club. This is an oceanfront café with fresh local seafood, friendly staff, and a great view of the beach and boardwalk. Add the Bistro One LR (American/Spanish) and two bars, and the Ritz-Carlton is well-equipped for your drinking and dining needs.

The best part: For us, it was our corner Club Oceanfront Suite overlooking the ocean on the fourth floor, with plenty of balcony space, wide-open bedroom, living, and bath (plus second powder room). The less-than-best: There are signs that Ritz-Carlton needs to be putting more money in maintaining this property. The canvas balcony dividers were torn and ineptly patched, the afterwards-added deadbolts securing the twin balcony doors were hardware-store models that I remember seeing in my childhood home decades ago, and the ceiling fans and overhead lights in the Bistro One LR were dusty and clearly neglected.

These are tiny points: The Ritz-Carlton is still the Ritz-Carlton. But for 1 percenters paying good money – nightly rates range from $349 to $5,500. Learn more