‘Bill Blair is the criminal in Rob Ford crack scandal’

Posted by: Bulletin Editor November 6, 2013 Comments Off on ‘Bill Blair is the criminal in Rob Ford crack scandal’

Today the real story once again is the one the mainstream media is playing down. The brother of Mayor Rob Ford, Councillor Doug Ford called for the resignation of Police Chief Bill Blair. 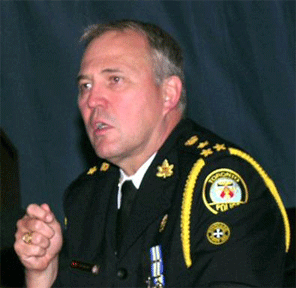 As stated in my previous article the head of the Toronto police service Bill Blair has been blackmailing politicians for years. Today Doug Ford did not go that far in his accusations of Blair only mentioning that Blair was too close with the politicians on his side. Citing a fishing vacation he went on with police board member Andrew Pringle.

“This is the most political police chief this city’s ever seen. He went out believing he was the judge, jury and executioner, he’s created a bias towards the mayor, he’s also compromised himself and jeopardized the case,” Doug Ford said. He also told radio station AM 640 the chief “wanted to go out and put a political bullet right between the mayor’s eyes.”

It’s clear that Bill Blair, who holds an unelected position in this city, thinks he can subvert the democratic process and get rid of politicians who don’t play ball with him and his agenda. Rob Ford came to office saying he was going to stop the gravy train at Toronto city hall and Blair and the TPS are the last people with a ticket to ride. The list of police officers in Toronto making over a hundred thousand dollars a year is large. Bill Blair has been acting like this is his city to run the way he sees fit for years. When Jack Layton was running in the last federal election he leaked to the press that Layton had been caught in a massage parlor raid. I was also told by a Toronto detective that he also blackmailed Olivia Chow into resigning from the police board months after the OCAP riots at Queens Park back in 2000. The real criminal in this whole affair is the police chief himself Bill Blair!

Now let’s look at the real reason for this media circus. Why are we hearing across Canada about Fords drinking and drug habit when Montreal has gone through five mayors in the last year due to them taking bribes and money from organized crime and developers? Very little from the media about that?

What about Hamilton’s mayor causing total havoc by implementing ICLEI policy dictated by the U.N.’s Agenda 21 program? Again nothing from the press about that?

Rob Ford did however stand up to the globalists, when the province added a unnecessary level of control in the form of Metrolink over the TTC to take control of transit planning, Ford stood up to the globalist organization’s plans and announced the people wanted subways and not the light rail transit dictated by the agenda 21 Metrolink. Rob Ford cannot be bought, bribed or blackmailed it appears.

The guy got elected to city hall and did exactly what he said he was going to do and cut out the corrupt and stupid spending practices at city hall. That’s unique for a politician these days. The media and the police chief are pushing a globalist corporate agenda. Rob Ford has stood up to that agenda and has always done what is in the interests of the common man in this city.

I like many others in Toronto don’t really care what a man does on his own time; it’s what he does in his office as mayor that makes a difference in our lives. I still support him and will vote for him again.

Like the rest of us Rob Ford is only a man. There are few of us that can say we have never gotten drunk and done something stupid that we regret in the morning. Rob said today that he got drunk and may have smoked crack. Is he still smoking crack? He said no and I believe that. Even with this new admission I still maintain that Rob Ford is the most honest man at city hall.