Seeds of Destruction: Hijacking of the world’s food system

Posted by: Bulletin Editor December 4, 2014 Comments Off on Seeds of Destruction: Hijacking of the world’s food system

As F. William Engdahl wrote in Death of the Birds and the Bees Across America: Birds and bees are something most of us take for granted as part of nature. The expression “teaching about the birds and the bees” to explain the process of human reproduction to young people is not an accidental expression. Bees and birds contribute to the essence of life on our planet. A study by the US Department of Agriculture estimated that “…perhaps one-third of our total diet is dependent, directly or indirectly, upon insect-pollinated plants.”[1]

The honey bee, Apis mellifera, is the most important pollinator of agricultural crops. Honey bees pollinate over 70 out of 100 crops that in turn provide 90% of the world’s food. They pollinate most fruits and vegetables — including apples, oranges, strawberries, onions and carrots.[2] But while managed honey bee populations have increased over the last 50 years, bee colony populations have decreased significantly in many European and North American nations. Simultaneously, crops that are dependent on insects for pollination have increased. The phenomenon has received the curious designation of Colony Collapse Disorder (CCD), implying it could be caused by any number of factors. Serious recent scientific studies however point to a major cause: use of new highly toxic systemic pesticides in agriculture since about 2004.

If governments in the EU, USA and other countries fail to impose a total ban on certain chemical insecticides, not only could bees become a thing of the past. The human species could face staggering new challenges merely to survive. The immediate threat comes from the widespread proliferation of commercial insecticides containing the highly-toxic chemical with the improbable name, neonicotinoids. Neonicotinoids are a group of insecticides chemically similar to nicotine. They act on the central nervous system of insects. But also on bees and  small song birds. Recent evidence suggests they could also affect human brain development in newborn.

Some five to six years back, reports began to circulate from around the world, especially out of the United States, and then increasingly from around the EU, especially in the UK, that entire bee colonies were disappearing. Since 2004 over a million beehives have died across the United States and beekeepers in 25 states report what is called Colony Collapse Disorder. In winter of 2009 an estimated one fifth of bee hives in the UK were lost, double the natural rate.[3] Government authorities claimed it was a mysteryToday more than ever, the world’s food resources are being hijacked by giant corporations that are turning farms into factories and replacing natural resources with genetically modified “food-like” substances.

F. William Engdahl is a leading researcher on the destruction of the planet’s food system and the profit-driven enterprises that are driving this devastating process.

To learn more, pick up your copy of “Seeds of Destruction: The Hidden Agenda of Genetic Manipulation“, published by Global Research. 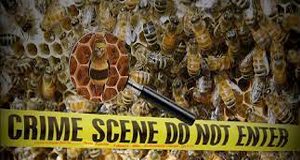 2014-12-04
Bulletin Editor
Previous: November home sales rise over same month in 2013
Next: Is safely generated electricity from nukes a pipe-dream or doable?