Eastdale Collegiate near Broadview and Gerrard brings farming to its students.  By combining a culinary program with a rooftop garden, students learn where their food comes from. It helps in building life skills and instilling healthy eating habits. 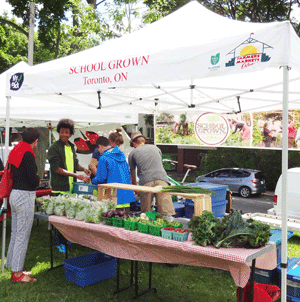 Students in the school’s culinary program prepare the food for the cafeteria, feeding between 30 and 60 people daily. Culinary instructor Jan Main says the students make from scratch a daily soup, quiche or pasta, salad and four types of sandwiches, as well as baking all the bread, biscuits, squares and sweets they use.

“The veggie wrap is now our most popular sandwich, which is great because many students didn’t know what this was when we first started serving it,” she says. “For many students, fast food and frozen food was all they knew, and now they’re eating salads and asking for things like pesto, which we make for pizza, pastas and appetizers.”

Not only does this emphasize healthy eating, she adds, but the program also gives students the opportunity to learn job skills, building their confidence. In addition to the school cafeteria, meals are also prepared for catered and community events, such as the Recipe for Change fundraiser in support of FoodShare Toronto’s Field to Table Schools program.

A complement to the culinary program is Eastdale’s new School Grown Rooftop, a garden on the school’s roof established last year in a partnership between the Field to Table Schools program and the Toronto District School Board (TDSB).

The 16,000 square foot roof was a tennis court in a previous life, so its reinforced structure made it ideal for the garden project, says James Davis, School Food Innovations Coordinator with FoodShare. 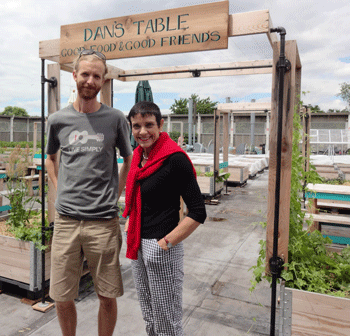 James Davis and Jan Main in front of Dan’s Table on the Eastdale rooftop.

In its first year, the Eastdale garden produced five types of hot and sweet peppers, beets, basil and mushrooms. This year, it has been expanded to also include salad greens, radishes, blueberries, raspberries, goji and thimble berries, tomatoes, kale and green and purple beans.

“We focus on small-scale production of high value, quick succession crops that are sold at farmers’ markets and local restaurants,” Davis says. “We sell cut greens in bags instead of head lettuce because that’s a higher value and they sell well. We also look for varieties that look beautiful on a market table.”

Two rows of the 240 planters on the roof are reserved for Main’s culinary students, as well as science students and members of the school’s gardening club, to decide what to plant. The rest are planted according to a crop plan developed by farm manager Katie German, which Davis says has made a real difference in revenue. A similar garden project at Scarborough’s Bendale Business and Technical Institute produced what Davis calls a “hodgepodge” of produce in its first three years, but when a crop plan was developed by German in 2013, they noticed a dramatic increase in sales.

Thanks to funding from TDSB, six Eastdale students and six Bendale students are working full-time in the two school gardens for seven weeks this summer, responsible for growing, maintaining and harvesting produce, as well as preparing restaurant orders and working their stalls at two local farmers’ markets.

In addition to production farming, the School Grown Rooftop’s two other main objectives are education and hosting events. During the school year the gardening club—as well as science, culinary and special education classes—work in the garden. Culinary and science students harvested beets last year and pickled them as part of their in-class learning.

“These are kids who have never seen anything grow before so it is a whole educational experience for them,” says Main, adding that FoodShare also does workshops with elementary school students.

A special eating area called Dan’s Table is dedicated to the memory of Dan DeMatteis, former chef at Café Belong in the Evergreen Brickworks who believed in good, local, well-cooked food. A year-end school barbecue was held in the space last month and students are encouraged to use the area.

Over 1000 people toured the rooftop garden and its adjoining classroom as part of the Doors Open Toronto event earlier this year and Davis says the vision is to use part of the space to host events like film screenings, weddings or outdoor yoga classes.

“We have lots of students here who love to grow food and work here,” says Ange, a Grade 12 student at Eastdale who is working in the garden this summer. “My favourite part is everything; you have to try everything to know what you like to do. I wanted to have fun this summer and I am; I’m going to remember this always.”