Posted by: Bulletin Editor August 4, 2013 Comments Off on Sammy Yatim report by TPAC 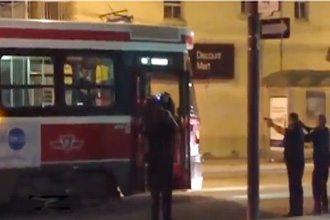 Sammy Yatim under the gun

Eighteen-year-old Sammy Yatim was acting strangely on the night of Friday July 26 on the Dundas streetcar. He pulled out a Swiss Army knife and demanded that everyone leave the streetcar. The driver was the last to leave – Sammy was then in the empty streetcar alone near the front door.

Police had been called and more than twenty officers surrounded the car. Several officers had drawn their guns and pointed them at Sammy. They yelled for him to drop the knife, then fired several shots, a short pause, then more – a total of nine shots. Officers then entered the car and tasered Sammy as he lay dying on the floor.

In response to the very strong public reaction, Chief Bill Blair made a statement on Monday morning to say he would do a complete investigation to ensure all policies and practises were followed. The officer who did the shooting was suspended for reasons that have not been released.

“The Toronto Police Accountability Coalition calls for an end to police killings of vulnerable persons and those experiencing emotional crisis.

As we have seen far too often, a Toronto family is dealing with the death of a member of their family at the hands of Toronto police. TPAC demands that the Toronto Police Services Board, Chief Bill Blair, and the Province of Ontario take immediate action to change the way police deal with people who are in mental/emotional crises and who do not comply with police orders in crisis situation.

After Michael Eligon was found running around streets near the Toronto East General Hospital in a hospital gown in February 2012, and was then shot and killed by Toronto police, community outcry led to the Toronto Police Services Board asking the chief of police for a full report on how the police force deals with people experiencing emotional and mental crises. That report came forward at the Board meeting of April 25, 2013, defending the current training and practice.

It has clearly changed nothing.

The Chief and the Board may believe that people in crisis or who are unresponsive to police should have no fears of the police and that their officers are doing an exemplary job. But reality always intrudes, as it did the very day after that April 25th Police Services Board meeting, when a mentally disturbed man wielding a machete near a bank branch in Scarborough was shot and killed by two Toronto officers. That occurred before the Mobile Crisis Intervention Team with its skills in de-escalation was called in to assist. Then only a month later, on June 8, 2013 Toronto police shot and killed a man who had a knife and seemed to be experiencing mental distress, on Adanac Drive in Scarborough.

In May 2012 the Ontario Government’s Ministry of Community Safety and Correctional Services announced it was undertaking an internal review of the manner in which police officers in Ontario deal with mentally distressed people. More than a year later, here we are with 6 more people dead, and where is the report? Requests in June to the Minister about the status of the report have gone unanswered.

More importantly, where is the change in how police approach these situations? TPAC calls on the Minister to expedite this report, and to immediately act to implement recommendations that will protect vulnerable people who come into contact with police.

Many people will say that arming all officers with Conducted Energy Devices (also known as Tasers) will prevent these deaths. TPAC takes the position that increased use of CED’s is not effective – research shows that CED’s can contribute to the death of “emotionally disturbed persons” in many cases, that police use them as first resort to force compliance when that is not their purpose, and they fail to address the fundamental issues cases like this demonstrate – the need for officers to use de-escalation as a first response when dealing with emotionally/mentally distressed people, and the need to reduce police use of deadly force when faced with non-responsive or non-compliant individuals.

Clearly a quantum shift is required in how police approach these situations – shift from exercising control (and punishing lack of compliance) to one of de-escalation in all situations. TPAC demands that the Province implement ongoing systemic review of police-caused deaths to determine the commonalities, the role of practices such as enforced compliance, and alternatives such as the expansion of Mobile Crisis Intervention Teams, and non-traditional primary alternative response units. (The Special Investigations Unit only looks for criminal wrong-doing.)

We also demand that Chief  Bill Blair and Police Board Chair Alok Mukherjee stop the rationalization and defence of current practises, and instead establish protocols that will stop the unnecessary killings of vulnerable people in our community.”

By John Sewell for TPAC